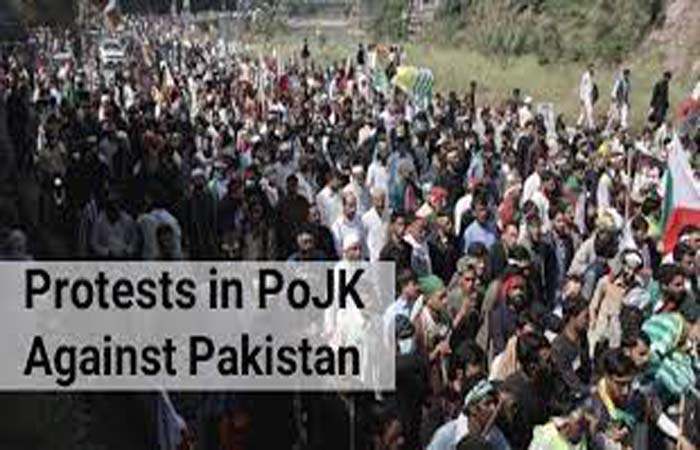 The Assembly elections in Pakistan occupied Jammu and Kashmir ( PoJK)  have started tottering  as new confrontation has emerged between the local government based in Muzaffarabad and Pakistani establishment that operates from Islamabad- Rawalpindi. Whatever may be the outcome of  the July 25 polls, the fact that has started coming to light that Pakistan treats  people of these territories as slaves.

Who is making this charge against  Islamabad government ? It is none else than the “ Prime Minister” of PoJK, which Pakistan calls as “ Azad Kashmir”, a deceptive picture that Islamabad seeks to present before the world  as if the land and the people were “ liberated”.

This liberation theory has been  consigned to dustbin by the PoJK premier Raja Farooq Haider. At his press conference in Muzaffarabad on Monday , Farooq Haider, “ Do they ( mainland Pakistan) consider us ( the people of PoJK)  slaves .”  And declared that , “ We will never be slaves to anyone” , and he warned the Pakistani government against any misadventure in the land of theirs. This confrontation is not usual clash between the local and the federal government , it denotes more than mere clash of political differences, it is eruption of the rebellion against Pakistan and its designs on PoJK.

The campaign for the PoJK Assembly polls has brought  sharp spotlight on the manner in which  the people of the occupied territory have been treated by Pakistan , and unable to quell the rebellious voices against it, Pakistan has resorted to greater suppression . It is now toying with the idea of converting PoJK into one of the provinces of Pakistan , so that  it can  annex it , because it fears that the growing rebellion could  result in bigger problems than it is facing today .

Farooq Haider’s threat to stage a sit-in in Islamabad to make the people of Pakistan to listen  to the woes of PoJK has already shown Pakistan and its rulers in poor light. Now, it is evident that Pakistan would try to manipulate the outcome of the elections to ensure the victory of the Pakistan Tehreek-i-Insaaf party that rules Islamabad . And then, it is certain to do what it did in Gulgit Baltistan – to take measures to annex the territory . Islamabad has already proven that its repeated references to UN resolutions on Kashmir is a distraction. It wants to divert the attention of the people of Pakistan from the real issues and make a case as if the UN resolutions on Kashmir are not meant for it, but for  the Indian part of  Jammu and Kashmir that is legally and constitutionally part of  India  alongside PoJK and Gilgit Baltistan and the territory that Pakistan has gifted to China.

But the revolt brewing in POJK against Islamabad-Rawalpindi on march and the elections being held  there have started tottering , because Islamabad has already determined the outcome of the polls.