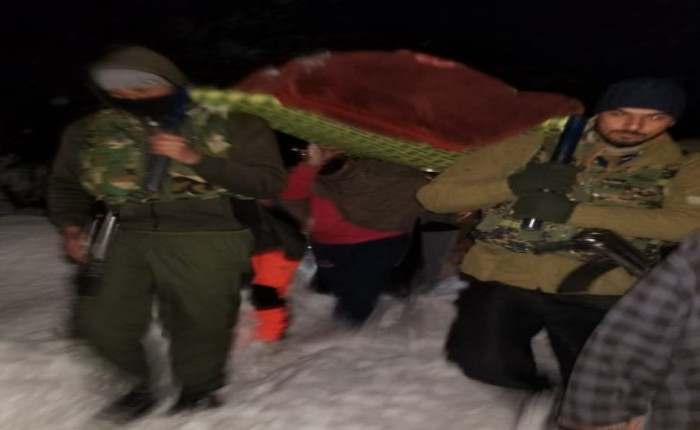 The ‘janbaaz sipahees’ brave cops are all out helping people in distress and adversaries.
The latest example is when police in Chandusa Police Station received a distress call from Shirpora village at about 9pm. This was regarding a patient suffering from heart attack ,on which the police swung into immediate action and dispatched a party for help.

SHO and his team reached village by foot due to heavy snowfall in Kandi Belt and patient a lady namely Rifat Jan W/o Showkat Ah Khan R/o Shirpora,age about 25 yrs was brought on stretcher by police and locals to Community Health Centre Chandoosa from her village.

Now she is beign treated there by doctors.
Besides fighting terrorism from the front theJammu and Kashmir police has been helping the local population in distress and during adversaries more so during inclement weather.
They are evacuating people stuck in snow, invincible areas, the sick and the aged.