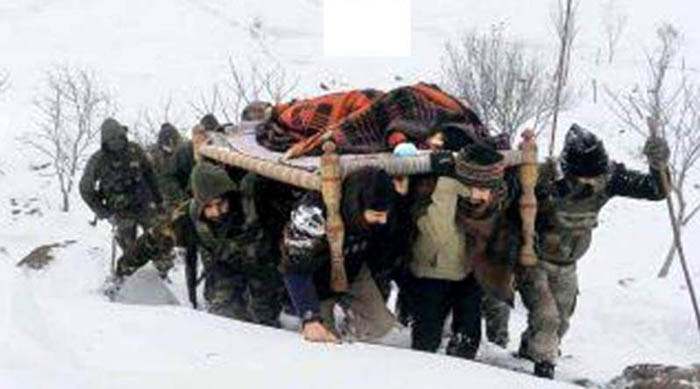 With the help of the army during the heavy snowfall in Jammu and Kashmir, a pregnant woman has given birth to twins. The Army came to help the woman at the right time and admitted her to Bandipore District Hospital in North Kashmir. Officials said on Sunday that on February 8, a villager called the company commander of the Thana’s Panar camp at Bandipore and asked the army for help to take his pregnant wife Gulshana Begum to the hospital.

It is informed that due to heavy snowfall the weather was very bad. The temperature was minus 7 degree Celsius. Officials said that due to snowfall the roads were completely covered with snow, due to which the movement of vehicle was impossible. But it was necessary for the woman to take her to the hospital immediately.

In such a situation, the soldiers of Bandipore Rashtriya Rifles, after heavy snowfall and difficult conditions on the roads, reached the woman’s house and after crossing the ice frozen on the road, they took pregnant lady on their shoulders with the help of stretcher for two and a half kilometers. After this, the woman was taken to Bandipore District Hospital from an army ambulance. Considering the importance of each moment, the Army had arranged for doctors before meeting the civilian officers before reaching the woman’s hospital.

After the health checkup, the woman was told that she is going to be the mother of twins, for which the operation will be required. After this, he was taken to Srinagar Hospital for the operation. According to the officials, the woman gave birth to twins on the night of February 8.