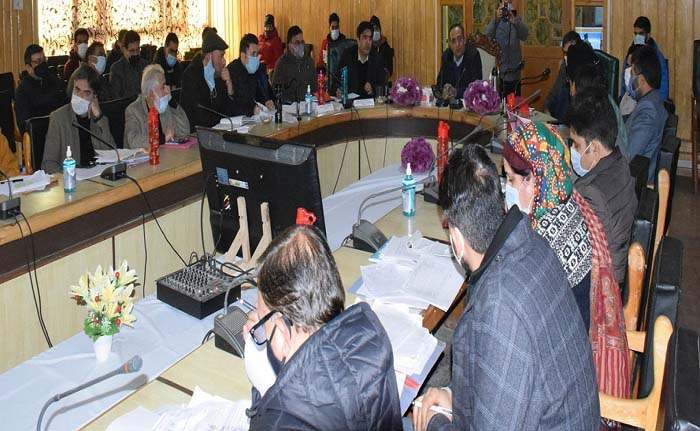 Principal Secretary underscored that the UT government is putting sustained efforts to remove difficulties and making social security & welfare schemes easily accessible to all eligible citizens. He exhorted upon officials to undertake regular public outreach activities for ensuring 100% saturation of all the beneficiary-oriented schemes and prompt redressal of public grievances.

Reviewing the District Capex plan and other important infrastructure projects in the district,  Principal Secretary passed instructions to  Deputy Commissioner to monitor all Infrastructure Projects periodically and ensure their completion within stipulated timelines. Enquiring about the status of Power Augmentation works being done in the district, he asked the concerned to submit regular reports on the stages of project completion. He directed the power development department to disconnect the line of top defaulters who have not paid electricity charges and to carry out more inspections  during the late hours for power theft.

While addressing officers he said that Pulwama is on the trajectory of development and prosperity and can be made a developmental model if officers and other stakeholders remain proactive and positive.

He emphasized on officers to work in unison and also directed them to identify bottlenecks and impediments in ongoing projects so that projects are accomplished in a time-bound manner.

He asserted that lackadaisical approach of any Government officer can’t be afforded and officers should be in forefront in making public services accessible.

Among others the meeting was attended by Chief Engineer, PDD, Managing Director PDD,  besides all the district / sectoral officers.