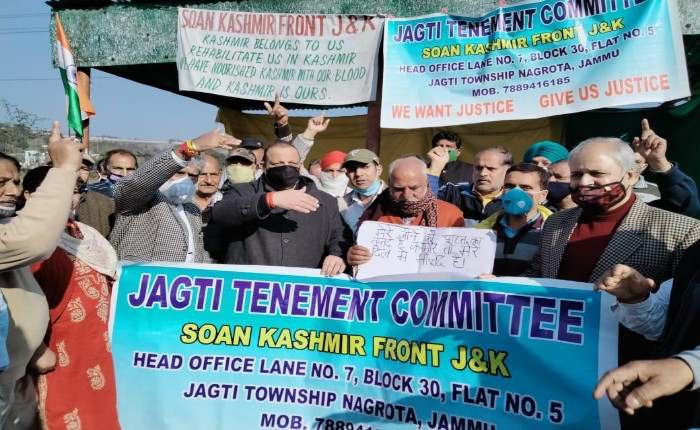 National Conference Provincial President Devender Singh Rana today urged Lieutenant Governor Manoj Sinha to take a considerate view with regard to demands of the Kashmiri Pandit migrants, residing at Jagti Township, who are on sit-in dharna for the past over four months.

“Till their safe and honourable return to their homes and hearths in the Valley, every effort is needed to be made to mitigate the sufferings of the migrants”, Mr Rana said during his visit to the Jagti Township and interaction with those sitting on dharna.

As a mark of solidarity, he along with leaders of the National Conference Minority Cell, sat with the protesters, who are demanding increase of cash relief from Rs. 13000 per month to Rs. 35000 per family, disbursement of pending amount of compensation for their damaged properties and retrieval of their encroached lands and houses in the Valley.

The protesting migrants have also been demanding filling up of the remaining 3000 posts under the Special Prime Minister’s Employment Package announced due to strenuous efforts of the then government led by the National Conference. They also demanded issuance of appointment orders in favour of 45 and 83 candidates under the PM’s Package, whose appointments were stayed and subsequently vacated by the Court.

The agitating migrants also sought adequate accommodation for the migrant employees posted in Srinagar and elsewhere in the Kashmir Valley.

During their interaction with the Provincial President, the agitating migrants said that the Lieutenant Governor had assured them of looking into these issues during his visit to the township in September last year but nothing concrete has emerged so far.

Rana assured the migrants that he would take up their demands with the Lieutenant Governor for earnest redressal.

Dhar and Ji Ji Yogi described the demands as genuine and said that these need to be fulfilled earnestly. They also hoped that the administration would reach out to those on dharna and resolve the issues to their satisfaction