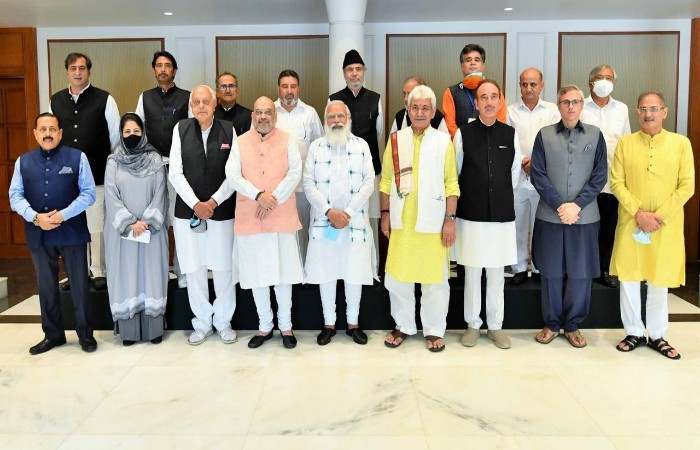 Among the many takeaways out of Thursday’s all party-meeting , the most important was for the youth of the Valley who were asked to take up the leadership role in Jammu and Kashmir.

Prime Minister Narendra Modi , who had convened a meeting of all the leaders of all major political parties of Jammu and Kashmir , gave a direction by emphasizing that the dialogue was the essence of democracy . It was a soft but firm rebuff to those who alleged that the abrogation of Article 370 and Article 35 A had made the youth angry.

What Prime Minister meant was that though he was talking to the traditional and elderly leaders of Jammu and Kashmir, there was a wide scope for the new leadership in J&K to move ahead of the political ambitions that were hampering them, their capabilities to lead and deliver.

This was evident when he declared: “ Our democracy’s biggest strength is the ability to sit across a table and exchange views.” He lived up to his words when he met for over three and half hours with the 14 leaders of UT of J&K and heard them out , their concerns with patience and returned to them with his answers.

“ I told the leaders of J&K that it is the people, especially the youth who have to provide political leadership to J&K, and ensure their aspirations are duly fulfilled.” This is to invoke the quality leadership of the youth who until a couple of years ago were subjected to watching few chosen ones to contest elections and represent them. They were made to sit on margins.

This had started changing with the holding of three sets of elections of the democracy connected to the ground, formally translated as grassroots democracy. After the Panchayat elections , Block Development Council and then the DDC polls were held, throwing an altogether new leadership conscious of their responsibility and accountability to the people . The development process has picked up pace and making the connectivity and related facilities available is the best way to uphold the human rights . The development defines human rights a and those living in denial of this are violating the human rights of the masses.

There is a promise in the air that there would be elections to the Assembly after the Delimitation Commission submits its report in which the seats would be increased , that will offer greater opportunities to step into the electoral field test their leadership skills and quality.

The roadmap is very clear that the road to peace passes through development-oriented politics .