Rocking its own boat in Kashmir PAGD style 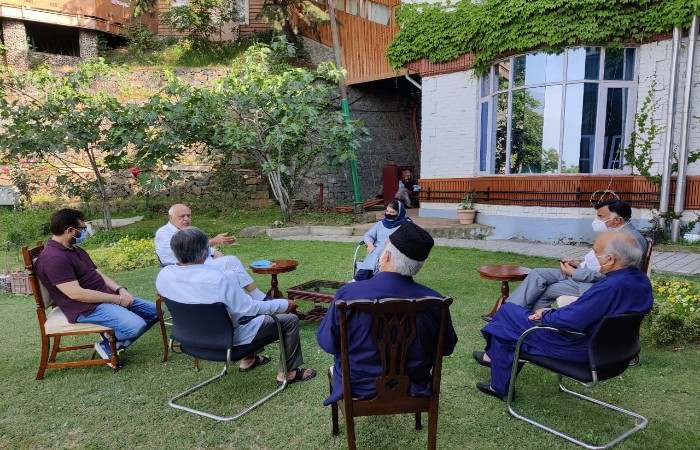 The  stage is set  for the  talks between the leaders of Jammu  and  Kashmir and the Centre at an all-party meet in New Delhi on Thursday , while the hopes are high  but there also are some dark patches which reflect  People’s Alliance  for Gupkar Declaration ‘s self-inflicted  wounds on its own credibility ahead of  their  meeting to be chaired by chaired by Prime Minister Narendra Modi.

A wonderful  opportunity for the leaders of Kashmir, especially that of the PAGD,  to  talk about the issues of the people   with substantive facts and figures , is now in the danger of falling  apart . The PAGD leaders  have not shown  any sensitivity towards the reconciliation  with Delhi  as they have  chosen to talk in terms of the agenda of the separatists and the establishment of Pakistan. These forces do not want any reconciliation to come about between Delhi and Kashmir because that harms their own interests.  The PAGD appears to be becoming a partner of these forces inimical to the interests of the people of Kashmir.

The people  had expected , the leaders of National Conference and PDP , who are the main constituents of the PAGD, to air their grievances , which are more  economic in nature and less  about the extraneous politics that had wrecked their lives for decades.

The people  in the streets of Kashmir   spoke  about their economic  woes that have visited them due to the spell of lockdowns caused by the pandemic of the  coronavirus . They expected that these mainstream leaders would frame an agenda that was people-centric and not that of the self-interests of the leaders and their families . They call themselves leaders of Kashmir, but they are agitating for something that is against the interests of the people.

“ Yes, we do want  some political set up   in Jammu and Kashmir  to enable us to have the elected representatives  who can air our grievances, but at the moment  our first consideration is how to survive?,” said  Amjid Dar , a resident of Srinagar  and he added : “ we want  economic relief ,” he said and hoped that these leaders would put their woes on the priority list.

These expectations of the people  seem to have been lost  in the PAGD  agenda  as its leaders are viewing things through single prism  lens – restoration of Article 370  and Article 35 A  .These provisions had made Jammu and Kashmir  and its permanent residents  privileged  lot  lot  in pre-August 5, 2019, era , but at the end of the day worked against the interests of the masses as they  were made to believe in their self-woven dreamland, far removed from the reality.

A thesis is at work  that says that the people have  suffered because of the August 5, 2019 moves of the Centre . This thesis is  being  propagated by the PAGD leaders  to avoid their own accountability  as to how much  damage  had they done to the  erstwhile state and the residents.

The political privileges are hollow without the  sound economy . And  the abrogation of Article 370 made them equal to the rest of more than 1.3 billion people across the country . Other states and people are progressing  without special rights and privileges that  J&K had prior to August 5, 2019. The PAGD reinforcing the idea of inequality  by pushing for  the  restoration of Article 370. It is undermining the capacity of the people of J&K to compete and excel in the equal word . Now their opportunities have widened and they have a bigger field to work on.

The people want no illusions but real time situations and fruits.