Separatists’ no to opening of schools 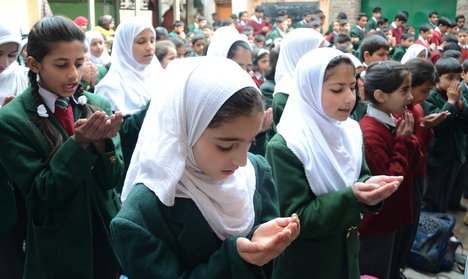 Separatists  have ruled out   exemption of schools and  other educational institutions from their shutdown and protest calendar , which is issued after regular intervals to  prolong and speed up the  unrest  that erupted in early July following the killing of Hizb-ul-Mujahadeen Commander  Burhan Wani .

They have decried the “ lecturing  on the future and education of Kashmiri children”  by the mainstream leaders from  the government, whom they described as “ stooges of India” in a statement issued here this evening.

The statement issued under the three big names in the  separatist landscape Syed Ali Shah Geelani, Mirwaiz Umar Farooq  and Mohammad Yasin Malik  has ruled out any rethink on  changing the scope of the calendar  to allow the schools to function normally, untouched by the street protests.

Geelani and others issued this statement apparently in response  to the mounting pressure to allow the children unhindered access to schools .  The separatists made it clear that they had no such plans and went on to draw the parallels between the educated illiteracy and  the real education of  distinguishing  between “ good and bad and right and wrong.”

The statement read that the  “literacy only makes us and our children familiar with sounds and signs but real education is what liberates our minds. Education enlightens the soul and enables a person to distinguish between good and bad, right and wrong, truth and falsehood”

“ Going by the basic and traditional definition of education, those presiding over the worst oppression of Indian state and lecturing us on ethical and social graces can be anything but educated. .”