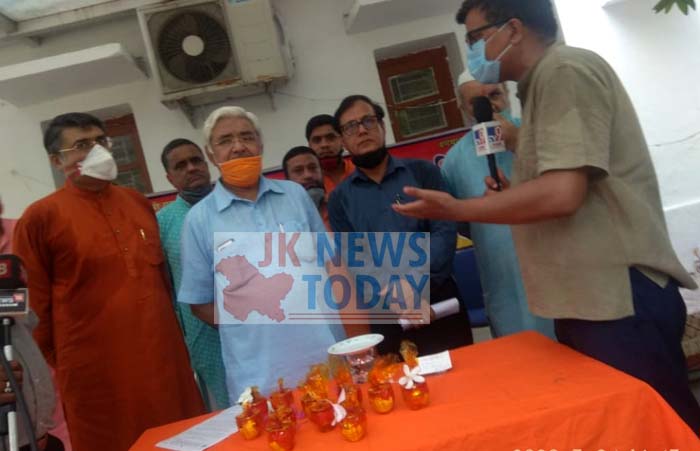 Save Sharda Committee , Kashmir on invitation of VHP attended Press Conference in New Delhi today and presented the pious soil got from Sharda Peeth in PoK to its president Alok Kumar. The soil along with soil collected from various parts of the country shall reach Ayodhya on 5 August where it will be used in Garb greh of the temple in the foundation. Sh. Alok Kumar working president of VHP held a press conference today in which the soil urns were displayed.

Speaking on the occasion Founder of Save Sharda Committee Sh. Ravinder Pandita said that he is very thankful to the civil society members of PoK , who had sent the pious soil & flowers from Sharda Peeth to him. “ The pious soil of the maha Shakti Peeth has been utilized for a pious occasion of construction of Shree Ram Mandir in Ayodhya, the birth place of Lord Ram.

The urns area being despatched to Ayodhya and will be used in the foundation ceremony of the temple by Prime Minister Sh. Narender Modi on 5 August.   Save Sharda Committee has been struggling for more than 2 decades for exploration of Sharda Peeth and reopening of pilgrimage.