Shiv Sena  protest against price-hike of fuel and LPG 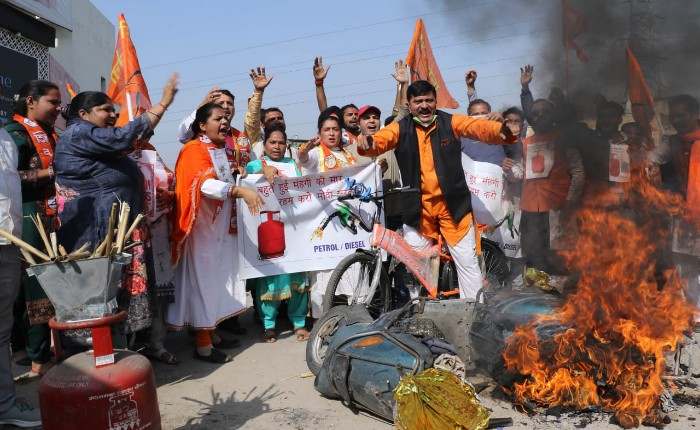 The activists  of Shiv Sena Bal Thackeray, Jammu  protest against the skyhigh prises of Petrol, Diesel and LPG.Angry Shiv Sanik’s  also set their two-wheeler on fire and

Addressing the protesters, Sahni said that due to the huge increase in the prices of petrol and diesel, inflation has started touching the sky.

“With the hike in the prices of petroleum products, the prices of daily essentials have also been increased and causing problems to the poor people,” he added.

“People are still recovering from the COVID-19 pandemic but the hike in petroleum products increased their problems of people,” he said.

He informed that the excise duty on a liter of petrol is at Rs 32.98 while on diesel at Rs 31.83 per liter which is more than the base fuel price.

“At the same time, the tax being charged by the state government, the public is being charged about 200 percent tax on petrol and diesel,” he added.

Apart from fuel prices, he said the government has increased prices of LPG three times a month

He added that people are facing hardship but the BJP-led government is busy in election campaigns. He threatens to intensify agitation if the problems of people will not be solved at the earliest.