SHRINE BOARD’S HANDHOLDING OF ITS EMPLOYEES AND THEIR FAMILIES 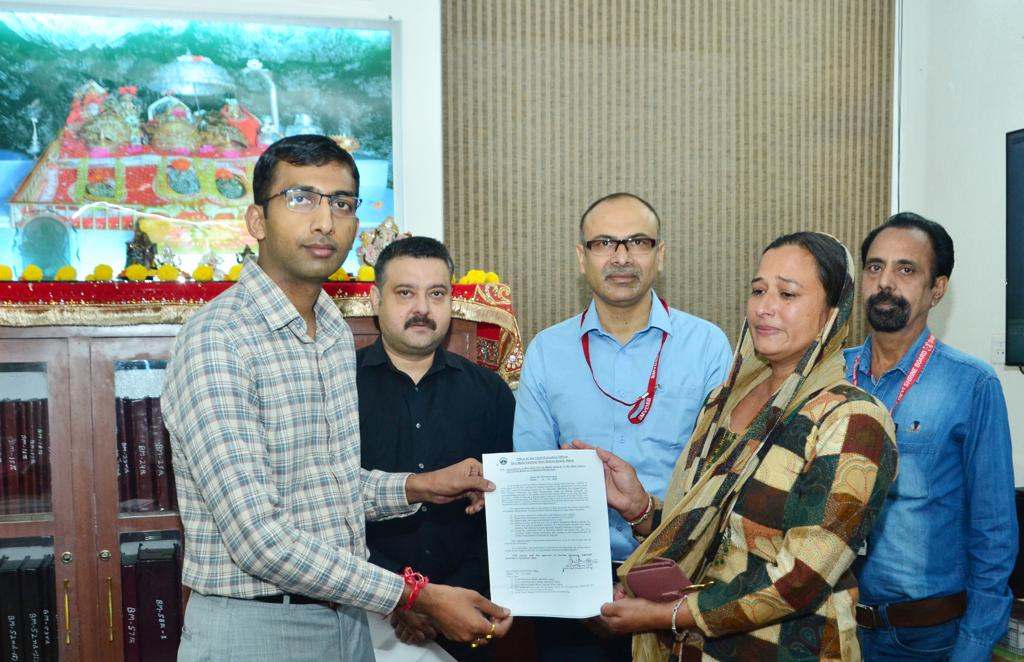 Shri Mata Vaishno Devi Shrine Board does handholding of its staff and their family members to lift them out of stressful situations , and in one such case, Chairman of the shrine board , Lieutenant Governor Manoj Sinha approved the appointment of two members of families whose earning hands died in the recent months .These appointment letters handed over to widows of Surjeevan Singh and Kuldip Chand showed that the Shrine Board cares for its staff and their families . This gesture is much beyond providing economic stability to the families facing financial, social and other crises because of the death of the bread earners . It is to provide them dignity in life .As a sequel to the approval of the Chairman of the shrine board, Chief Executive Officer Anshul Garg , IAS , handed over the appointment letters to Savita Rajput W/o of Late Surjeevan Singh and Anita Devi W/o Late Shri Kuldeep Chand in the Board invoking relaxation provision of Board’s Compassionate Appointment Policy. These appointments letters were handed over at the Central office of the shrine board , Katra . The CEO expected them to serve the devotees with utmost dedication and honesty.Shrine Board is managing millions of devotees visiting shrine from all over the country and its officers and staff serve the pilgrims 24×7. This is as per the commitment of the shrine board . CEO also disclosed that 37 candidates have been appointed on compassionate grounds as per policy in place and hardship allowance for 1450 employees posted at Higher Altitudes has already been enhanced by a record 45% after 8 years.As regards career progression of the staff, Shri Mata Vaishno Devi Shrine Board has recently issued orders for promotion of 131 employees which includes 5 nos. from Group-A, 9 nos. from Group-B and 117 nos. from Group-C as per recommendations of Departmental Promotion Committees whose meetings are being conducted regularly on the direction of Hon’ble Chairman.Further, as a significant measure for the welfare of employees Chairman, SMVDSB has also approved enhancement of Special Diwali incentive by 25% for employees of Shrine Board on the eve of Diwali for their total dedication to service of pilgrims, ensuring best possible arrangements for their comfort and well being and conduct of smooth and hassle free yatra especially the 3.50 lakh pilgrims during the preceding Navartaras.Meanwhile, CEO also issued ‘Letters of Appreciation’ to Sham Lal and S Omker Singh, Jr. Sahayaks, posted at Passenger Ropeway Bhawan for dedication, devotion and honesty upholding the high traditions of the Board aimed at facilitation of the pilgrims visiting the Holy Shrine of Shri Mata Vaishno Devi Ji.