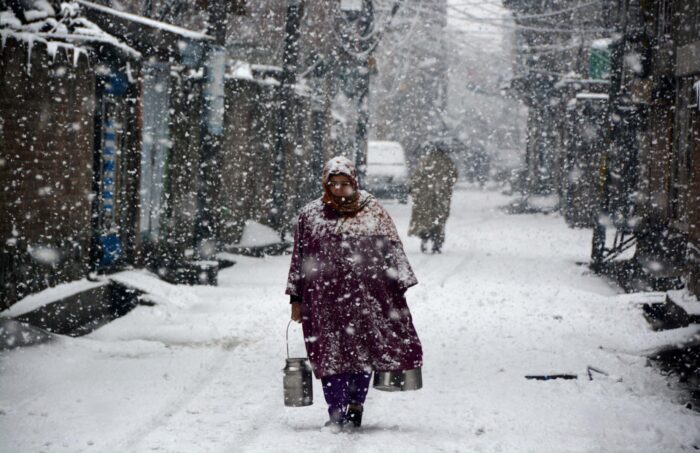 Intermittent snowfall continued for the second successive day on Thursday in the upper reaches, including world famous ski resort of Gulmarg and border town of Gurez, while rain lashed plains in Kashmir valley.

Meanwhile, a weather warning has been issued during the next 48 hours even as heavy rain, snow and thundershowers would occur at upper reaches in the valley, where the night temperature improved and settled above normal due to overcast conditions.

A Met department spokesperson said that moderate rain and snow would occur during the next 48 hours in Kashmir under the influence of a Western Disturbance (WD), which is active in the region. “There will be a slight improvement on Saturday,” he said.

However, he said another WD, which originated from the Arabian Sea and is approaching the region though Afghanistan and Pakistan, will hit the region on Saturday evening. “Under the influence of this WD, light rain and snow would occur at many places in the valley,” he added. He said the weather is expected to improve from March 16 onwards.

Much to the delight of tourists, Gulmarg, which is already covered under several feet of snow, received intermittent snowfall since Wednesday morning, resulting in dip in the day temperature. Kongdori and Apharwat, the highest point of the cable car project in Gulmarg, also continued to receive light to moderate snowfall.

The ski resort was the only place in the valley where the night temperature settled below freezing point. Against minus 3 degree recorded on Wednesday, the mercury dipped and settled at minus 1.5 degree, which is 2 degree above normal. “Despite intermittent snow since early Wednesday morning, the tourists are out on ski slopes enjoying different activities,” a hotelier told UNI over the phone.

He said the ski resort, which is about 55 km from here in north Kashmir, witnessed a huge influx of tourists this winter season after zero business during the last two years. “Most of the hotels are booked to April end in Gulmarg,” he added.

Intermittent rain continued for the second successive day in the summer capital, Srinagar, where the night temperature improved and settled about 3 degree above normal. Against 4.3 degree recorded on Wednesday, the night temperature in the city improved and settled at 6.8 degree. The chill continued throughout the day due to incessant rain since early this morning in the city, which witnessed huge traffic jams on most roads following moderate downpour. The maximum temperature remained several degrees below normal during the last couple of days due to wet weather, forcing people to once again wear sweaters and jackets.

World famous health resort of Pahalgam, about 100 km from here in south Kashmir, continued to receive rain since Wednesday morning, resulting in dip in the maximum temperature. The night temperature in the health resort improved about a degree from Wednesday and settled 1.6 degree, which is about 3 degree above normal.

Other parts in north Kashmir — including border towns of Gurez, Keran, Karnah, Tanghdar and Machil — received fresh snowfall on Thursday while rain lashed plains in south and central Kashmir.