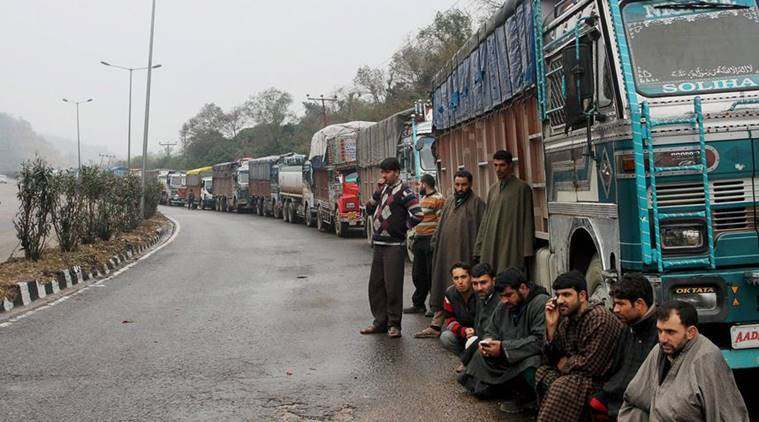 The Jammu-Srinagar national highway was closed for traffic on Tuesday following snowfall in Jawahar Tunnel area and multiple landslides between Banihal and Chanderkote, officials said.

Over 300 vehicles have been stranded on both sides of the highway due to the closure.

The Jawahar Tunnel the gateway to Kashmir experienced snowfall this morning following which traffic was suspended between Banihal and Qazigund townships, the officials said.

They said incessant rains also lashed most parts of the highway, the only all-weather road linking Kashmir with rest of the country, for the third day on Tuesday, triggering landslides and shooting of stones from hillocks overlooking the highway at nearly a dozen places between Banihal and Chanderkote.

Despite incessant rains and the lurking threat of shooting stones, the men and machinery kept the highway open and the majority of the stranded vehicles in Ramban were cleared last night itself, he said.

He said a major landslide had struck the highway overnight at Cafeteria Morh, while the road is also closed by debris at many places including Maroog, Monkey Morh, Panthiyal, Digdole, Sherbibi, Shabinbas.

Once the weather improves, all out efforts would be made to ensure early restoration of the highway, the officer said.

Officials said reports of snowfall were also received from other high altitude areas including Peer Ki Gali along Mughal Road connecting the twin districts of Rajouri and Poonch in Jammu region with Shopian in south Kashmir.

The Mughal road was closed for traffic in December and is expected to be thrown open on completion of the snow clearance operation in the first or second week of next month, they said.

They said snowfall was also recorded in the upper reaches of Ramban, Doda and Kishtwar districts, while Jammu city was lashed by overnight rains, resulting in a drop in the temperature.

The minimum temperature in Jammu city settled at 14.9 degrees Celsius against the 16.2 degrees Celsius the previous night, a spokesman of the Meteorological department said.