Stop politicising the Armed Forces- look after them 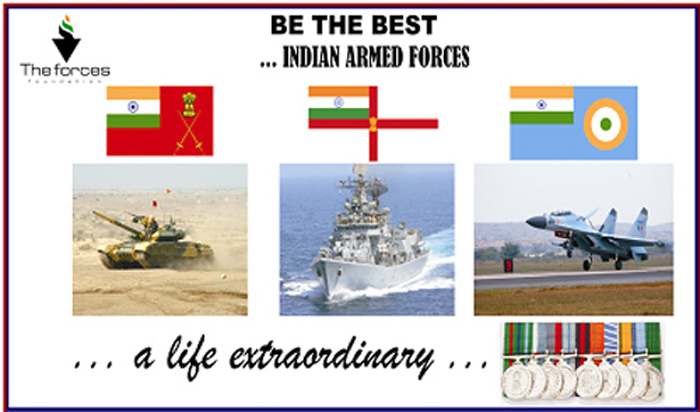 The entire nation is dismayed at the vocal slugfest going on between the political parties on the national media. The political discourse has reached its lowest ebb with the choice of language nothing less than deplorable. One had heard such phraseology and words at street level politics but expected much sober and mature terminology at the highest echelons of politics. Oratory is a skill and USP of a successful politician but it should never cross the ‘Laxman Rekha’ of morality and decency. In the yesteryears people eagerly awaited to listen to the national leaders and appreciated them for their vision and oratory skills. What has happened that has led to such dismal discourses that at times one wonders about the calibre of the modern day politicians. One possible cause could be a shift from “accommodative politics” of yesteryears to modern day “combative politics” with media acting as a force multiplier.

The Indian Armed Forces, Army in particular, are being unnecessarily being dragged into this political one-upmanship. At the eye of the storm is the successful ‘surgical strike’ carried out by the Army on the intervening night of 28th -29th September that shook the Pakistani Deep State and world-wide changed the image of India from being a ‘Soft State’ to a nation ready to fight terrorism and its perpetrators employing all elements of national power of which ‘political will’ is most critical. While the nation is celebrating and feeling proud of its Army, a few politicians have questioned the veracity of these strikes and demanded evidence, the line being towed by the Deep State. At times, one wonders if they are bidding at the behest of inimical forces! But they do not realise the harm they are doing to the morale and professional ethos of the Army. In order to score political brownies over the issue of ‘surgical strike’ they are doing irreparable damage by dragging Army in order to meet their political ends. The Army has successfully executed the assigned task and should be left free to train and prepare for the next task.  At this stage one may not be very certain of the magnitude of the next task, but being a thoroughly professional organisation the Army would be busy preparing itself for any task that the nation may assign to it.

By trying to leverage Army’s successful counter terror operation to uplift their electoral fortunes the political class is doing a grave harm to our national interest of keeping the Armed Forces ‘apolitical’. It goes to the credit of the Indian Armed Forces that despite their counterparts in all the neighbouring countries in South Asia, at some time or the other attempted to overthrow the democratic governments through military coups, they have remained loyal to the Constitution of India and the government of the day. Their contribution to nation building is unquestionable. The Army is proud of being ‘apolitical’ and abhors being dragged into political controversies. The Army’s loyalty is to the nation and government of the day and not any political party. The Army has successfully responded to nation’s call on numerous occasions since independence in different domains ranging from war, counter insurgency, internal security, counter terrorism, proxy war, counter infiltration, out of area operations (Sri Lanka and Maldives), operations other than war (OOW), United Nations Peacekeeping Operations, disaster management and aid to civil authorities. It is rightly referred to as ‘last bastion’ of national security, when all other elements raise their hand the Army is called in. The military’s efficiency and professionalism flows out of it being “apolitical”. It is a national asset and do not downgrade it by politicising it or its achievements.

The Armed Forces do not wish to become “poster boys” on huge bill boards and neither do they need unnecessary publicity. The military is a silent force, desires to be left alone in order to prepare for the ultimate. Rather than playing politics over the military all political parties must concentrate to ensure its ‘capacity’ and ‘capability’ building so that the nation is assured. In a matured democracy, the ongoing vocal slugfest would have been replaced by learned and informed debates about the preparedness of the Armed Forces to meet any type of threat ranging from nuclear to hybrid warfare. Alas, our politicians are not bothered about that but only about their immediate political interests. No politician or political party has ever tried to gauge the morale of the armed forces personnel. Remember, it is the man behind the gun which matters in the ultimate analysis. No amount of modern gadgetry or sophisticated weaponry can be a substitute for a soldier’s morale. Dear politicians, the armed forces do not need your political bickering but they need your understanding and support to safeguard their ‘izzat’ and status. ‘Izzat’ to a soldier is like divine nectar or elixir and he can go to any extent to safeguard it.

“Those who cannot remember the past are condemned to repeat it”, goes an old saying. It is time to recall what Chanakya had written to the all-powerful King of Magadha on the matters of defence. “The soldier does not enrich the Royal treasuries nor fills the Royal granaries. He does not carry out trade and commerce nor produce scholars, litterateurs, artisans, sculptors, architects, artistes, craftsmen, doctors and administrators. He does not build roads and ramparts nor dig wells and reservoirs. He does not do any of these directly. The soldier only and merely ensures the tax, tribute and revenue collectors travel forth and return safely; that the farmer tills, harvests, stores and markets his produce unafraid of pillage; that the trader, merchant and financier function and travel across the length and breadth of the realm unmolested. Patliputra reposes each night in peaceful comfort, O King, secure in the belief that the distant borders of Magadha are inviolate and secure, thanks only to the Mauryan Army standing vigil with naked swords and eyes peeled for action, day and night, in weather fair and foul, all eight praharas, quiet unmindful of personal discomfort and hardship, all through the year, year after year. While the citizenry of the state contributes to see that the state prospers and flourishes, the soldier guarantees it continues to EXIST as a State! To this man, O Rajadhiraja, you owe a debt: please therefore, see to it, on your own, that the soldier continuously gets his dues in every form and respect, be they his needs or his wants for he is not likely to ask for them himself.” He also warned the King, “The day the soldier has to demand his dues will be a sad day for Magadha for then, on that day, you will have lost all moral sanction to be the King!”

The successive governments since Nehru have been responsible for systematic down gradation and deprivation of the Indian armed Forces. A lot has been written on the subject in the media and need not be repeated. What needs to be highlighted is the ongoing resentment that is brewing in the Armed Forces due to further deprivation due to the recommendations of the 7th CPC. It is a fact not to be ignored that the Armed Forces have yet to implement the recommendations of the 7th CPC while rest of the nation has done. The bottom line is that those who decide the pay, perks and allowances of the armed forces personnel have no clue about their peculiar service conditions and environment in which they operate. And those who have the requisite knowledge and experience are not involved in decision making. The Indian Armed Forces are faced with the challenges from ongoing societal changes in the country. The recruitment base in the army has shifted from rural, illiterate, and traditional to urban, educated and broad-based. The soldier today is more aware, demanding and comparative. He questions his entitlements and compares with others including the service conditions. The beauty of the Indian soldier is that despite the treatment meted to him by the nation he is ever willing to make the supreme sacrifice for the ‘izzat’ of his nation. In order to sensitise the readers a few instances of the down gradation and deprivation of the Armed Forces are being highlighted consequent to acceptance of 7th CPC recommendations.

The disability pension for the members of the armed forces has been reversed from the current percentage based system to slab based system only for them implying their civilian counterparts will continue to get percentage based disability pension. It is for the readers to judge whose service conditions are more injury prone a soldier or a civilian? Then why should a civilian get more disability pension compared to a soldier? A soldier is compulsorily retired early in organisational interest at an average age of 40 years while his civilian counterpart serves for 60 years. In order to cater for this discrepancy earlier a soldier was compensated by adding a ‘weightage’ to his service so that he is compensated for his less service at the time of retirement. 7th CPC has done away with the ‘weightage’ system leading to great pensionary losses for soldiers only. The armed forces are known for its strict pyramidalhierarchal structure of promotions. Only 2% officers attain the ‘general’ ranks. While it is different in the civil services with no supersessions. The civilian officers enjoy what is known as non-functional upgrade (NFU) implying promotion to higher pay without actually performing the duty of that rank. This has resulted in skewed inter-se seniority between defence forces officers and their civilian counter parts in the organisations where they work together leading to functional crisis. The defence forces officers are being denied the same and has forced them to knock the doors of judiciary. The allowances recommended for a soldier serving in Siachen is much less compared to his counterpart serving in North East (cities and towns). These are only a few anomalies highlighted to sensitise the readers, there are many more. The political leadership in the country will do a yeoman’s service to the nation if they join together to ensure that the interests of the Armed Forces are not subverted and the India does not have to repent ever for ignoring the warning of Chanyakya.

(The writer is a Jammu-based political commentator, columnist, security and strategic analyst. He can be contacted at anil5457@gmail.com)

Vaccination must for teaching and non-teaching staff prior to opening of schools, colleges