CUISINE OF DOGRAS OF JAMMU: A PERFECT EMBODIMENT OF SATTAVIC AND RAJASIC QUALITIES

The Dogra cuisine has a distinct identity and brings to the fore the diversity and uniqueness of the Dogra culture which flourishes and prevails over Shivalik Hills and its adjoining plains in Jammu and Kashmir, Punjab and Himachal Pradesh.

The traditional cuisine is good from health point of view. It is that food which nourishes, purifies, and is beneficial to the body and helps in the development of higher senses. The beauty of the cuisine is in the preparation, combination and is in the procedure that is followed.

Jammu’s native Hindu population are mainly vegetarians. The splendours of Jammu cuisine include such dishes as red kidney beans eaten with fragrant long-grained Jammu rice, an array of vegetables like cauliflower, cabbage, turnips, peas and potatoes. Spices are usually used after being roasted and ground, a technique that adds an unusual aroma and taste to the food. Milk and milk products are popular and plenty of fresh fruits are available but rice and red beans are the staple diet. Wheat is converted into delicious fat stuffed unleavened breads filled to capacity with mashed potatoes, grated radish or cauliflower, always eaten liberally spread with pure clarified butter called ghee, or with fresh homemade pats of butter and large bowls of fresh yoghurt.

The hallmark of the Dogra cuisine is ‘Madhra’, pulses cooked with curd and garnished with Khoya and dry fruits. ‘Maa Ka Madhra’ is a delicacy relished by the Dogras on festive occasions. Two types of Madhras are known i.e. salty and sweet madhras. The urad(mash) or rajmash or roungi or potato chips are fried in ghee. Well churned curd, salt, chilli pods, cloves of garlic, powdered turmeric, powdered coriander are added. It is cooked on low flame. It is eaten with cooked rice. Sweet Madhra is prepared by the addition of turmeric in milk and it is allowed to simmer. Dry fruits like dates “Chhoaras” and raisin “Sogi” are added and further cooked.

Kiyur: It is a typical Dogra preparation made of loosely kneaded leavened wheat flour (only maida). It is spread over the Tawa so that it assumes a jelly like form of bread. It is taken with sugar and yoghurt. It is a special dish offered to bridegroom by sisters of bride on the wedding day. 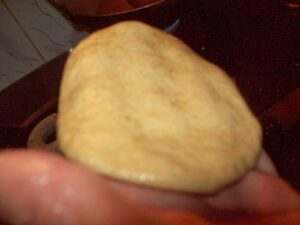 Khamira, Pathoru (babbru) and Thothru: Wheat flour is kneaded and leavened with yeast (khamir) and then baked on tawa. Khamira is taken with ghee or butter. Pathorus have poopy seeds, coriander seeds and peeled almonds. Thothrus are globular in shape and smaller in size, preparation is same. 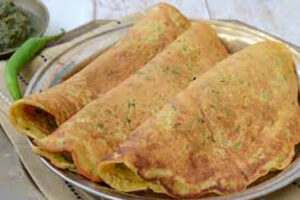 Charolian and Chilla: Both these are special preparations and made during monsoon season. Charolian is made from thin paste of fine wheat flour put in earthen vessel with four tubular holes (reason behind the name).The paste is allowed to flow on a big tawa called loh in a manner that four parallel lines are formed in the tawa. Similarly cross lines are formed while allowing the fluid to flow at right angles to the first with the result that the resultant product has squares all round and is baked on low flame and is taken with milk. Chilla is prepared from gram flour. It is made spicy by adding salt, coriander powder and chilli. 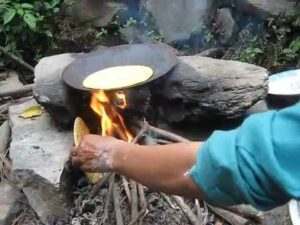 Toda: It is made from maize or bajra flour or rice flour. Flour is wetted with warm water and is constantly rubbed with the palm. It is then rounded, flattened and baked on tawa. The toda made up of maize is sometimes fried and is taken with ‘saryan da saag’ whereas that from bajra is taken with curd (yoghurt) or milk or ghee.

Guchiyyan (Dried Mushroom-Black Morels): It grows naturally in forests and cannot be cultivated; it is a priced commodity and makes an excellent dish with Mountain potatoes (Pahadi Aloo).

Curry: Curry in Dogra kitchen means a sour curd dish and not the usual spicy gravy. It is prepared with churned curd.

Auria: It is prepared by grinding sarson (mustard) seeds or rai into a fine powder and mixed with yoghurt and turmeric. It is then churned for some time and kept aside for fermentation. The slices of boiled and peeled potatoes or pumpkin are added to it. It is a pungent and digestive dish taken mostly with cooked rice. 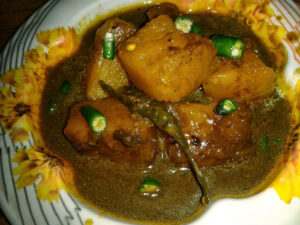 Ambal: It is prepared with any of the three sour materials described – (i) tamarind is soaked in water, rubbed with hands and filtered to remove the seeds and other insoluble material or (ii) wild grown pomegranate seeds are crushed and mixed with water or (iii) boiled unripe mangoes Pieces of pumpkins or potato are added to it. Gur (jaggery) or sugar too is added. Ambal is always on the menu on ceremonies and Jag. It is relished with rice and gram pulse. 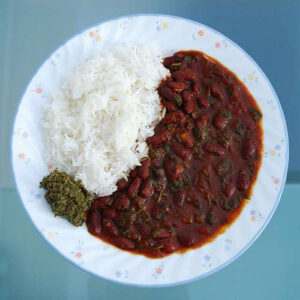 Rajmash (red kidney beans) served with Basmati rice and Anardana Chutney (raw pomegranate seeds) is a feast in itself. Rongi (Black eyed beans) and Kulthi (Horsegram) known for its medicinal properties are also a popular part of the diet. Dal cooked especially in a clay pot locally called Kunni and left to simmer over slow wood fire lends a distinct flavour.

Dogras are fond of relishing sweet, sour and tangy preparations like Auriya a dish of curd and potatoes spiced and fermented with rye. Mani is another tasty preparation made of half ripened mangoes. Timbroo chutney is also well liked .It is believed that tangy dishes combined with pulses help in the digestion of protein rich food. Another interesting aspect of this cuisine is Dhuni whereby mustard oil is poured on a hot burning charcoal and put into the utensil containing the freshly prepared dish which adds smoky aroma. 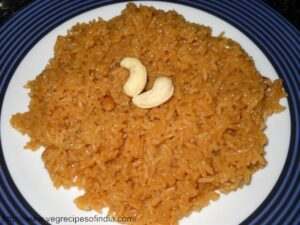 Mehri: Cooked rice is prepared with churned yoghurt having little turmeric and bay leaf (tejpattar) and rai (mustard seeds).It is prepared on ‘Nagpanchmi’ as an offering to ‘Naag Devta’.

Kulthein di Khichdi: ‘Kulth’ is a kind of cereal which is typical dogra food as it is grown only in Jammu region. It is very delicious and healthy. It is usually taken in winters to keep warm and healthy.

Gucchiyein aale Chol (Rice): Gucchiyein (dry mushrooms or black morels).a naturally grown vegetable is expensive and is taken with rice. It is very deliciouscuisine to eat.

Another major treat worth mentioning in Dogra Cuisine is Paaji – an assortment of sweet snacks including Rote (type of sweet hard bread) Kalah and Mathiyan (deep fried discs made of refined wheat, salt and ajwain seeds), Suchiyan, Luchian, Chille, Chiroliyan, Dhropras (which are basically pancakes fried in Ghee) and Gulra -a sweet preparation made of rice flour, Ghee and dry fruits. Paji is generally presented on the occasion of marriage or any other auspicious celebration and is packed in a cane basket.

During Lohri ‘ Tricholi’ a type of snack is prepared by mixing Til (seasame), Gur (Jaggery), popcorn. On Makar Sankranti, Khichdi made by boiling newly harvested rice and black gram dal is eaten.The mothers prepare Bhugga a type of prasad from til, gur and sometimes khoya (thickened and dried milk) on the occasion of Bhugga fast which is undertaken by Dogra womenfolk for long lives of their children. On Janmashtami, falahar or fruit based food is taken. A special food Sund Panjiri is made from roasted seul, dry fruit, sugar and grated coconut and is taken as Prasad.

No surprise the Dogras are known as sweet natured and sweet tongued (Mithri ae Dogre di boli te Khand mithe lok Dogre). The region boasts of a variety of Burfi made from abundant supply of locally available Khoya. Palang Tarod (Milk Cake) made from fresh milk and sugar is another specialty which is much sought after, Mesu a sweet prepared with besan, sugar and ghee. However, no write up on Dogra sweets can be considered complete without mentioning Patisa a delightful preparation of besan, sugar, desi ghee and flavoured with cardamom seeds served soft and fresh which melts in the mouth.

Chutneys taken by Dogras are Anardana Chutney and Chhachha, an unripe mango Chutney.

Dogra cuisine is indeed a treat beyond comparison. The dishes are divine. None can resist falling for this cuisine; as for me I am already in love with it!!