Why blag or borrow, when begging is a burgeoning business!

As a vehicle draws to a stand at a traffic intersection, there is a section that springs into immediate action. The traffic signal turns into a magnetic field where a halted vehicle epitomizes a magnet and a swarm of young children, pregnant women carrying babies and differently-abled men embody an iron which comes conjoins itself to the vehicles at supersonic speed and a relay of clamour and clangour erupts. The plea is to drop a few coins in the poor hands to satiate empty stomachs but what is more hungry is their eyes, who are already on the lookout for the next target!

An archaic anti-begging law coupled with the indifferent approach of all stake holders of the society, has oiled the wheels of mendicity in the city. Beseechment is seen as profitable business and a way of life by the beggars as bludging on the public is any day easier than working one’s fingers to the bone. Moreover, such is their business acumen, that they not only fully exploit the seasonal variations by increasing their mooching activity in festive season but are also thoroughly aware of the locus and placements that can extract  more alms.

Indigence is mooted as the prime reason for cadging but while penury is real, begging is not! Instead, it is all a part and parcel of a big swindles headed by kingpins of mafias. Neonates are rented and drugged, infants are kidnapped, youngsters are amputated and their eyes are gouged out. The fear of mafia is no more limited to the victims and their families alone, the general masses are equally fearful of the scammers. 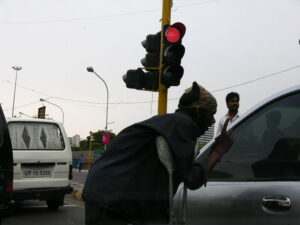 “Beggars trail around everywhere – streets, footpaths, parks and even towards ATMs. At times I really feel threatened while walking alone when suspicious men and women do not give up on following me” said Neha Choudhary, a 20-year college student hailing from Gandhi Nagar. It is indeed not easy to differentiate a real beggar and ill-willed stalkers. “No effort has been made by the administration and law enforcement agencies to conduct background checks of thousands of dubious persons roaming city streets along with children”, asserted Mr. Suresh Sharma, a resident of Bag-e-Bahu.

Even thought the Prevention of Beggary Act (1960) of J&K explicitly provides for arrest of any person who is found begging and detention of such person in Beggars Homes on the directions of the court, nevertheless the legislation merely remains on paper and is never brought into practice by the authorities. From time to time, governments wages war against beggars and begins a drive to sanitize the city, however, in the absence of strict adherence to law, beggars continue to stick to their guns.

Withal, turning a blind eye towards the flourishing illegal syndicate in the state is going to be of no avail. The law implementation machinery must swing into action and ensure cent percent enactment of anti-begging legislation. Coercion exercised on children to beg undoubtedly comes under the purview of child labour laws, ergo slapping of criminal charges on parents and guardians will serve as a deterrent for the members of the mushrooming industry. Furthermore, such children should be duly rehabilitated in Children’s Home and guaranteed their fundamental right to education. Not to forget, there are few genuine beggars out there, who are not on rolls for any mafia or beg out of sheer laziness but because of being old, forsaken or differently-abled, they have no other option than to beg in order to survive. The government must necessarily identify such exceptions and take up their responsibility diligently. Individuals, on the other hand, can play the lead role in petering out this menace by discontinuing the practice of giving away money in generosity as when their will the none to give alms, nor will there be any stretched arms!