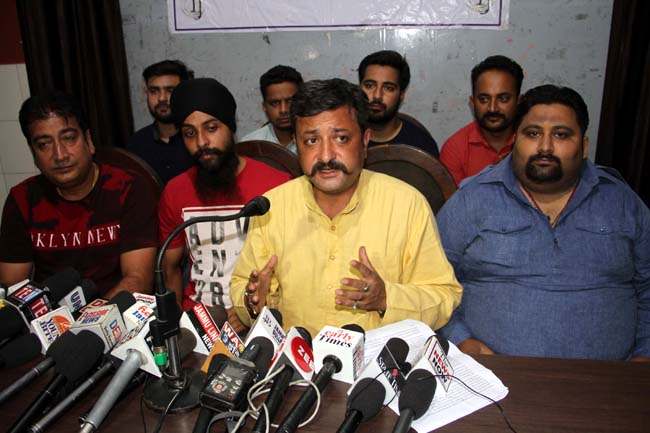 Credentials of supporters of cross-border trade should be scanned

Expressing gratitude towards Governor N N Vohra for taking personal interest to liberate youth of J&K from the deadly menace of drug addiction by directing the agencies to detect supply of narcotics through cross-LoC trade, Team Jammu today emphasized on the need of immediately stopping this trans-border trade to keep a check on narco-terrorism, which is consuming lives of the youth of the State, irrespective of caste, creed, colour, region and religion.

“Directions given by the Governor to authorities concerned including DGP police to go tough on smuggling of banned items and narcotics through cross-LoC trade between two parts of the divided State and to urgently undertake complete verification of all traders engaged in cross-LoC trade within one month and deregister the traders with doubtful antecedents has vindicated Team Jammu’s stand that narcotics and other banned drugs are smuggled from across the border through cross-LoC trade”, Chairman of the Team Jammu, Zorawar Singh Jamwal said while addressing a press conference at Jammu.

“It is now an open secret that international drug lords and anti-national elements have taken control of the cross-LoC trade but successive state governments had intentionally allowed continuation of this illegal business through cross border trading routes due to vote bank politics”, regretted Mr Zorawar Singh Jamwal but hailed Governor N N Vohra for taking personal interest in checking the on-going misdeeds through cross-LoC trade.

“Team Jammu has been fighting against drug addiction since 2013 with a slogan “Jai Jammu-Jio Jammu” to mobilize more and more youth of entire Jammu Province in its war against drugs”, highlighted Mr Zorawar Singh Jamwal.

“Narco-terrorism is more dangerous than terrorism but by the so-called peoples’ governments in J&K had intentionally or unintentionally allowed this menace flourish in the state”, Mr Zorawar Singh Jamwal rued and added some legislators and ex-legislators have individually supported Team Jammu’s efforts to eradicate their menace from the society but successive governments have failed to take any step.

Mr Jamwal sought to draw attention of the people that the National Investigating Agency (NIA) has already registered a First Information Report (FIR) and was investigating routing of hawala money through the cross-LoC trade routes for funding terrorism and stone pelting in the Kashmir valley.

Reiterating his demand of scanning credentials of some traders and self-proclaimed peace activists of J&K being involved in ‘flourishing’ the cross-LoC trade, Team Jammu chairman said that it was  really surprising that meetings to discuss this trade always being held in big cities outside the country like Singapore, Thialand, Washington, Dubai etc etc. “We have apprehensions  that such meetings are usually organized by international drug lords for the enjoyments and entertainment of  self-proclaimed peace activists and so-called traders whose names have been used by the international drug mafia to ensure smooth flow of their consignments from the across the border to every nook and corner of India” he said and urged the Governor to direct police and other intelligence agencies to take note of such meetings held outside the country.

Exhorting members of the civil society to jointly launch decisive war against drug menace, Team Jammu chairman said that this problem would not be solved by some individual and some particular communities because there is need of joint fight of the people all religions, castes, creeds and colours to single out those who have been involved in playing with the lives of younger generation.