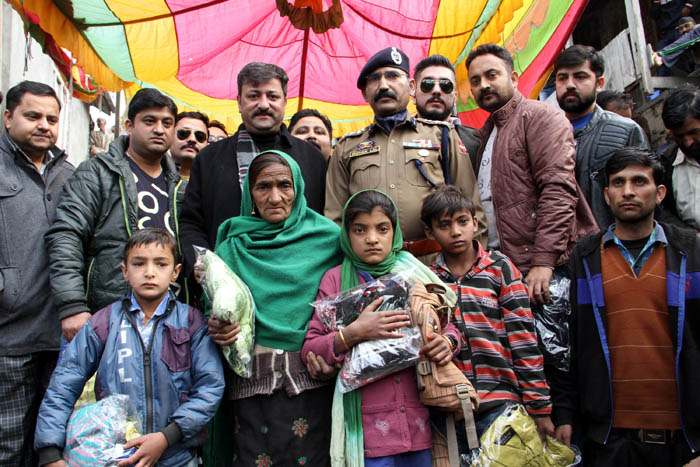 Reaches out to needy people of remote areas of Ramban

Jammu, December 24: Continuing its campaign to reach-out needy and marginalized sections of the society being neglected by the elected representatives, activists of Team Jammu headed by its chairman Zorawar Singh Jamwal today distributed woollen and winter clothes among economically weaker residents in the most backward and neglected remote Rajgarh belt of Ramban district.

Activists of Team Jammu especially reached remotest areas of Ramban districts so as to personally interact with inhabitants of these areas who have been bearing brunt of the callous attitude of the successive state governments.

These clothes were donated by people of Jammu, Samba, Kathua, Udhampur and Reasi districts in the collection centres set up by the Team Jammu in Jammu city, Samba, R S Pura, Akhnoor, Katra and Udhampur. Five-day collection of woollen clothes was started on December 15.

People from cross sections of the society came forward to donate clothes for the needy people to minimize their miseries at the time of need.

Addressing the people while distributing clothes, Mr Zorawar Singh Jamwal said that aim of the Team Jammu is to reach to the neglected and marginalized sections of the society. He said that on the one hand Team Jammu has launched a campaign against menace of drug addiction while on the other hand its activists have been shouldering their responsibilities as responsible citizens while extending helping hand to the needy people.

“Whenever there is need, activists of Team Jammu will reach to the needy people”, he said and recalled that Team Jammu was first to reach the affected families Saddal-Panjar in Udhampur district immediately after massive landslides in the area following flash floods in 2014.  He, however, regretted that till date elected representatives have failed to properly rehabilitate families which were affected three and half years back.

Calling upon the youth of Jammu Province to come forward to shoulder their responsibility of ending decade long discrimination, Mr Zorawar Singh Jamwal said that patience of people is running out because elected representatives-irrespective of their party affiliations have failed to come up to the expectations of the people. He minced no words in attacking BJP leadership, which claimed to be champion of Jammu’s cause.

Speaking on the occasion, SSP Ramban Mohan Lal who also participated in the event and distributed woollen among the needy persons, appreciated efforts of the young volunteers of the Team Jammu. He said that steps taken by these young people are source of inspirations for others. He said that serving needy people is the real service of the God. He also appealed to the youth to stay from drug abuse and join hands in nation building.