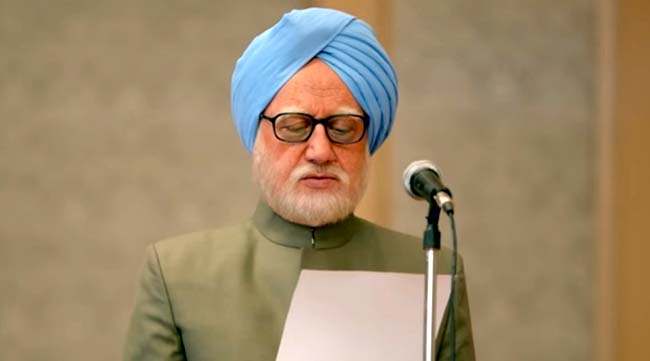 The Accidental Prime Minister trailer: Starring Anupam Kher as former PM Manmohan Singh, this film is based on the book of the same name by Sanjaya Baru. Akshaye Khanna plays Baru in the film that releases on January 11.

The much-awaited trailer of The Accidental Prime Minister, starring Anupam Kher as former Prime Minister Manmohan Singh, is out. The film chronicles the life of politician-economist Manmohan who served as India’s PM from 2004-2014.

The film has been generating lot of buzz owing to the striking resemblance of its characters with the real life counterparts. Kher has transformed himself into looking like Manmohan and has adapted his mannerisms quite well.

Watch the trailer of The Accidental Prime Minister here:

In the film, Akshaye Khanna plays Sanjaya Baru who was the media advisor of Manmohan Singh. It looks like Akshaye’s character is also playing the narrator in the film as we see him breaking the fourth wall and interacting with the viewers.

The film delves deep into the internal politics of the Congress party and how Manmohan Singh found himself in the middle of it.

The film is being released just before the Lok Sabha elections. Anupam Kher was asked at the trailer launch if BJP intends to use this to their advantage, he said, “Patriotic films release on Independence Day and Republic Day, so we decided that we will release our film around elections, as it is on politics. What’s the problem in that?”

He continued, “People will have a lot of things to say, and that I support a particular political party. But, I have always supported my country, and if that goes in the favour of a particular party, then it I’d a different issue. Unfortunately, when you speak about the country, people think that you have political ambitions. But I would like to talk about my country as much as I can.”

Kher also remarked that The Accidental Prime Minister is an international film. “The Accidental Prime Minister is an international film according to me. It can be compared to any film anywhere in the world, and it will stand on the top. Unfortunately, in our country, we look at it from the prism of politics. When we make Lincoln, we don’t ask the main actor which political party he supports. Let’s respect the art and the hard work that we all have put in. Let’s leave the interpretation to the audience.”

The film is based on Sanjaya Baru’s memoir of the same name that was released in 2014. Sanjaya Baru, the former PM’s media adviser, had earlier spoken to Indian Express about the memoir. He had said, “The book humanises him. It brings him out as a human being. The younger generation today thinks of him as some kind of robot, a statue. The ‘Singh is King’ image is gone. He has become an object of ridicule, not admiration. I am showing him as a human being, I want there to be empathy for him.”

Divulging details about his preparation for the role, Kher told IANS, “The opportunity of portraying a contemporary personality like Dr Manmohan Singh in The Accidental Prime Minister is an immense challenge for me as an actor. He is part of a 24/7 media era where world knows his persona minutely. I have been internalizing this character for the past few months. I look forward to translating that effort into cinematic reality.”