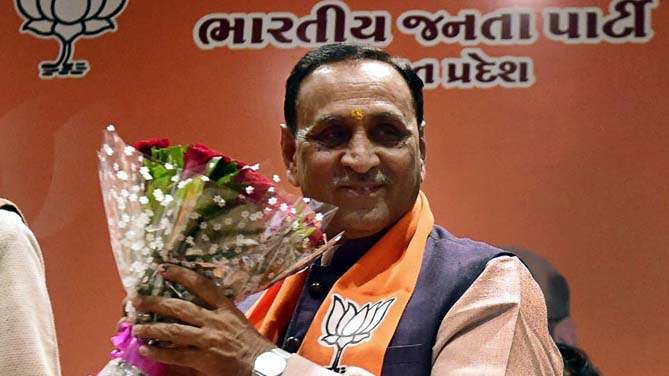 Ahmedabad, December 26:  Gujarat’s sixth BJP government, headed by Vijay Rupani, will be sworn in on Tuesday, amid indications that there will be new faces in his ministry and the presence of Patidar leaders will be strong as usual.

Prime Minister Narendra Modi and BJP chief Amit Shah are scheduled to attend the swearing-in ceremony at the secretariat ground in Gandhinagar, where Rupani will take charge as chief minister for his second successive stint.

Nitin Patel, a Patidar leader, too has retained his post as deputy CM and will be sworn in.

More than a dozen legislators are also expected to take oath of office at the ceremony to be presided over by Governor OP Kohli.

Patel’s continuance as deputy CM is being read as a signal to the influential Patidars that the community will be well represented in the ministry.

Multiple BJP sources tipped party state president, Jitu Vaghani, and his predecessor RC Faldu, both Patidars, to find a place in the government.

The outgoing Rupani ministry had seven Patidar ministers among a total of 25. In accordance with constitutional mandate, the government can have a maximum of 27 ministers in the 182-member assembly.

The new Rupani ministry is likely to have a fresh look because five outgoing ministers lost the assembly polls held in two phases on December 9 and 14. Besides, the BJP did not give tickets to six ministers for the elections.

“With the party’s prominent Dalit, tribal and OBC leaders losing, Rupani is facing a challenge to build a new leadership for these sections in his government,” said a senior BJP leader.

Former minister Ganpat Vasava, who retained his seat, Mangrol (ST), is likely to retain his cabinet rank, said a source.

Heavyweights Saurabh Patel and Govind Patel, who were dropped in the first Rupani government formed in August 2016, are expected to make a comeback, the source added.

Senior BJP leader Nima Acharya, who retained Bhuj seat, is a front-runner among women winners tipped to get a ministerial berth, said the source. The other contenders are Sangita Patil and Vibhavri Dave.

Overall, the BJP won 99 seats, 16 less than in the 2012 elections. It suffered extensive losses in Saurashtra region, a hub of farmers and Patidars, who are agitating for OBC status.

From winning 32 of 48 seats in Saurashtra region in 2012, the BJP’s tally slid to 19 in 2017. The Congress, boosted by support from Hardik Patel, convener of Patidar Anamat Anadolan Samiti, made inroads into Saurashtra.