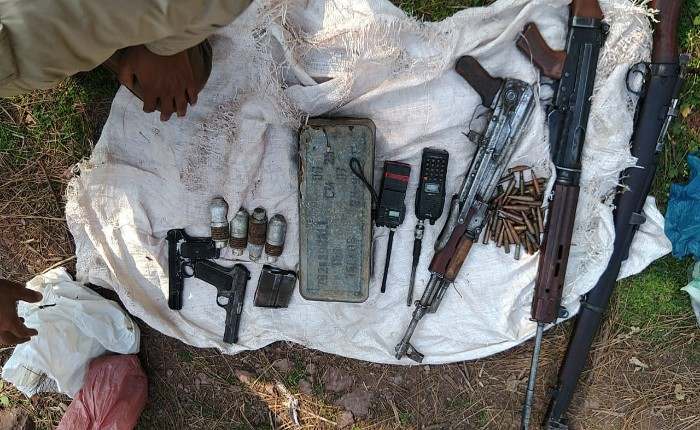 Indian Army & JKP in a joint ops on the night of 17-18 Feb has recovered a huge cache of weapons, including warlike stores in the hinterlands of Reasi district of Jammu region. On 17 Feb late evening, input was received from reliable source regarding suspicious activity in the remote & dense forests of Makkhidar in Reasi District.

These warlike stores were spread over large area in remote uninhabited forests of Makkhidhar forest in Reasi District. Persistent and coordinated efforts of joint search by Indian Army and JKP duly supported by local intelligence units has led to successfully unearth huge cache of weapons and war like stores.

Terrorists are in acute shortage of weapons & are desperate to try and disrupt peace and development being embraced by the people of the region after an extremely successful DDC election process. Reasi district has had the highest polling percentage of more than 80 percent during this DDC elections setting a record for the country. The AWAM of Jammu and Kashmir has seen through the sinister design and narrative of Pakistan to try and infect the scrouge of violence and disrupt growth and development being embraced by the youth of Jammu and Kashmir.

This comes immediately few days after security forces recovered war like stores in Jammu bus stand. The Army Spokesperson said that a “huge cache of arms and warlike stores were recovered from the hinterlands of South of Pir Panjal Ranges of Reasi District”

Joint operations by team of Indian Army with JKP Mahore cordoned off the area and launched a search operation to find out the warlike stores and sanitize the area. Spokesperson said that the huge cache of arms recovered comprises of AK-47 rifles, SLR Rifle, 303 Rifle, 2 Pistols with magazines, ammunition, 04 UBGL grenades & an entire box of AK 47 ammunition and radio sets.

Pakistan is continuously trying to push terrorists into this side of the border. In past few months the close coordination and synergy between Indian Army, JKP and intelligence agencies have successfully unearthed several caches of war like stores and broken network of Over ground Workers of Pakistan-sponsored terrorists of Laskar e Taiba & HUM in the hinterlands South of Pir Panjal Ranges.