We need to introspect what J&K has got in the past 70 years: Lt Governor 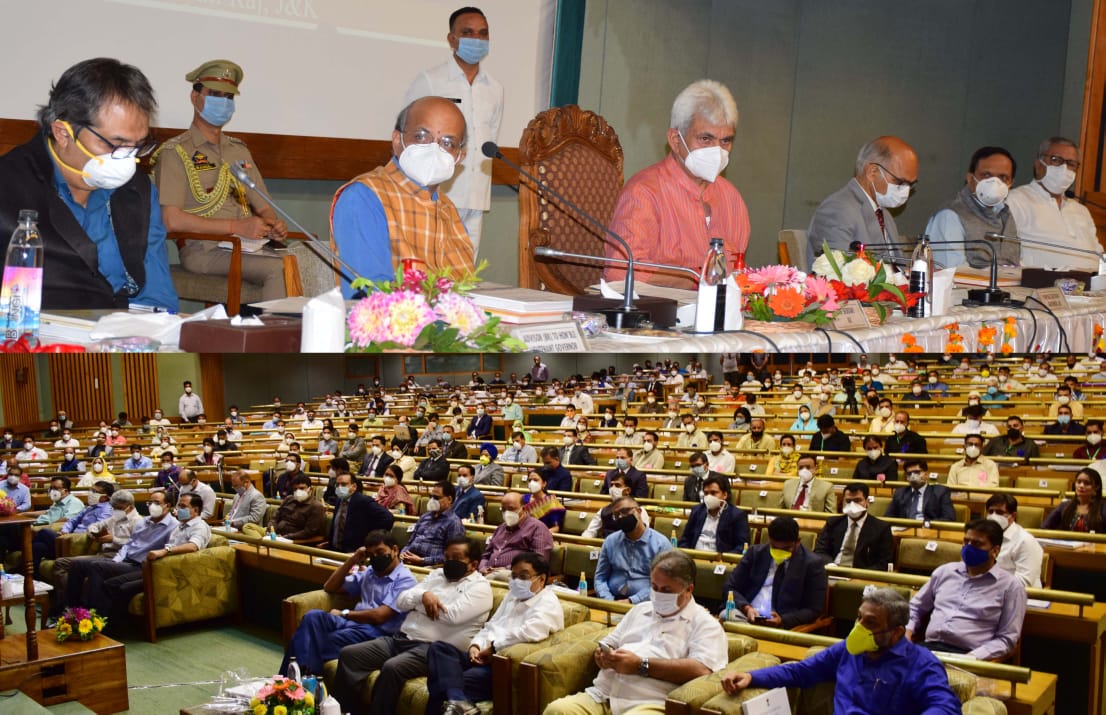 Lieutenant Governor, Manoj Sinha today launched the Coffee Table Books of UT, Districts and Departments highlighting the major developmental interventions being made in J&K in the past one year, during an event ‘Synergy – progress through people’ held here at SKICC.
During his address, the Lt Governor observed that the Month of August has a great significance in the history of India. We must introspect what J&K has got in the past 70 years. A new beginning of change has been witnessed by J&K and the UT Government is trying to push the agenda of development and progress forward. J&K’s development and the welfare of its people is the top most priority of the Central and the UT Government.
The Lt Governor said that the last two years have seen a massive developmental push with unprecedented acceleration of developmental works and projects in J&K and the impact has been visible on the ground.
The focus of the J&K Government in the last 2 years has been to give people a voice by strengthening grassroots democracy and empowering institutions of local self-government through participatory governance, he added.
“Let us all come together to fulfil the Gandhiji’s dream of rural empowerment and reach out to the masses with the common objective i.e equitable development”, the Lt Governor said.
Stressing on Zero Tolerance for Corruption, he emphasized on optimal utilization of public money on the welfare of the people only.
Quoting that Change begins with self, the Lt Governor maintained that we need to change ourselves so that others emulate us. He exhorted the officers to implement the best administrative practices to restore faith of the general public in accountable governance.
He said that the people of J&K have high expectations from the Government and the present generation is looking at us with hope. He called for committed efforts from all the stakeholders to meet the expectations of the people of J&K. The UT of J&K has no parallel in terms of resources and natural beauty, and all we need is to put in coordinated efforts to reach the new heights of development, he added.
On the occasion, the Lt Governor also paid tributes to the Martyrs who sacrificed their lives while upholding the democratic values.
Speaking on security related issues of elected representatives, the Lt Governor assured that their security and safety is the responsibility of the Government and it will be taken care of.
Giving due recognition to the significant role being played by the frontline Warriors in the fight against COVID-19 pandemic, the Lt Governor felicitated 20 COVID Warriors. Meanwhile, Six National Level Awardee Sarpanches and a couple of ULB Representatives were also felicitated by the Lt Governor for best practices and outstanding work in their respective Panchayats and Municipalities.
The role of Panchayats and ULBs in communication, social awareness, supporting the health system and in public functions like sanitation is praiseworthy, the Lt Governor said.
He urged the people to take precautionary measures and follow all the COVID-19 related SOP’s issued by the Government to prevent the transmission of the deadly disease.
While speaking on the occasion, Advisor to the Lt Governor, Baseer Ahmad Khan highlighted the major developmental activities being undertaken by the Department of Rural Development and Panchayati Raj over a period of one year on various fronts for the welfare of the people living in rural areas, besides various initiatives taken by the department to strengthen PRIs.
Sarpanches & ULB Representatives also spoke on the occasion and gave a brief about their working and liaisioning with the Government departments, besides monitoring their functions. They termed the Back to Village programme a historic initiative by the Government and also provided feedback about works being executed under B2V.
On the occasion, a short film highlighting the major developmental works being executed on the ground, was also exhibited, besides Panchayat & Rural Development theme song was played to mark the day.
Welcome address was delivered by Secretary to the Government, Department of Rural Development and Panchayati Raj, Sheetal Nanda.
Advisors to the Lieutenant Governor – Sh. Kewal Kumar Sharma, Sh. Farooq Khan, Sh. Rajeev Rai Bhatnagar and Sh. Baseer Ahmad Khan; Sh. BVR Subrahmanyam, Chief Secretary; Sh. Arun Kumar Mehta, Financial Commissioner, Finance department; Sh. Atal Dulloo, Financial Commissioner, Health and Medical Education; Sh. Bipul Pathak, Principal Secretary to Lieutenant Governor, besides Administrative Secretaries of various departments along with Deputy Commissioners and senior officers were present on the occasion.