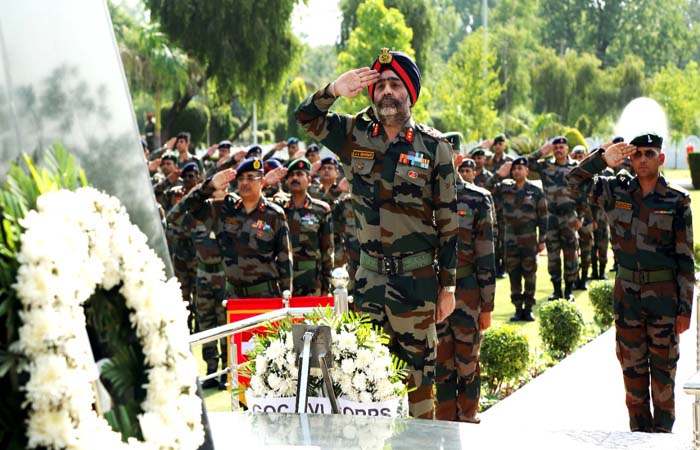 The White Knight Corps was raised on 01 Jun 1972 as part of Northern Command and Lt Gen JFR Jacob, PVSM was the first Corps Commander. Today White Knight Corps is one of the finest operational Corps of the Indian Army looking after the extent of Pir Panjal Ranges to the Shivalik Ranges and also the plains of Jammu and Akhnoor.

The Corps has a rich history and a saga of valour and bravery in all wars including Counter Insurgency Operations. The Corps has the honour of participating in all operations since its raising. Op Blue star in 1984, Op Trident in 1987, Op Rakshak since 1985 and Op Vijay in 1999 are few major operations in which the gallant soldiers of the Corps have etched their name in the history in Golden letters by their bravery and dedication to duty.

Today on the 50th raising day, the White Knight Corps continues its pursuance towards professional excellence with renewed vigour and perseverance.

Maj Gen J S Bindra, addressed all ranks of the Corps on the occasion. He recounted the rich history and motivated all ranks to rise to the occasion to ensure the Corps flag keeps flying high. He also remembered the gallant soldiers of the Corps who made supreme sacrifice in the Line of duty. The General Officer further added that besides the gallant actions in war, the Corps has also reduced the terrorist activities in the region by relentless efforts. The Corps has also been taking painstaking efforts in Nation Building through the wide range of projects under Op Sadbhavana.

The General Officer finally exhorted all ranks to continue discharging the assigned tasks with utmost professionalism and dedication while maintaining the high standards set by the predecessors and also congratulated all ranks as the White Knight Corps stepped on to a historical landmark of the glorious 50 years of its raising.