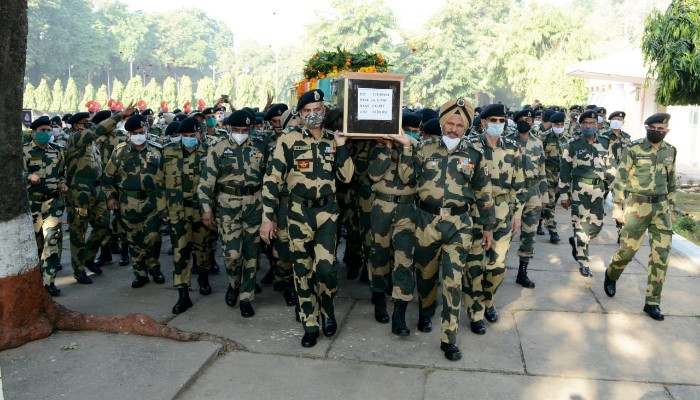 A wreath laying ceremony was orgnised at FTR HQ BSF, Paloura, Jammu to pay last respects to BSF Sub Inspector Late Sh Paotinsat Guite who attained martyrdom yesterday on 1st Dec, during ceasefire violation from Pakistan while defending the borders of the nation. He made a supreme sacrifice by laying down his life in service to the nation. Late Sub Inspector P Guite was martyred during unprovoked ceasefire violation in Rajouri Sector across the line of control while displaying conspicuous act of bravery and grit by standing to the enemy fire and in the process also saving lives of his comrades.

On this occasion IG BSF Jammu N S Jamwal said that BSF has the history of producing brave and gallant men who always remain committed to ensure sanctity of International Border and Line of control by endangering their lives. This brave act has once again proved that Bordermen are always ready to sacrifice their life, when the question of national security comes up. He also ensured that all benefits applicable to him will be given to NOK of martyr in fast track manner.