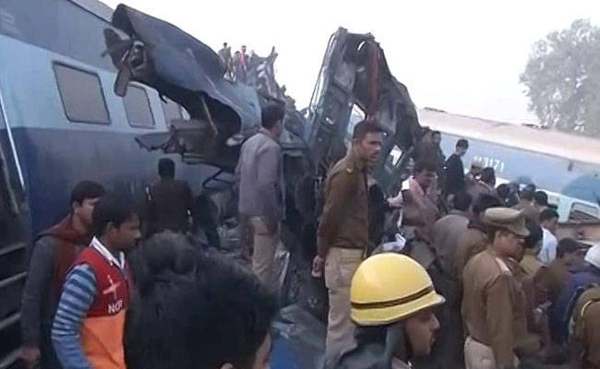 At least 100 people were killed and another  over 150 injured when 14 coaches of the Indore-Patna Express derailed near Pukhrayan in Kanpur Dehat district of Uttar Pradesh early Sunday morning  today.

The tragic accident took place at around 3am near Pukhrayan, about 100 kms from Kanpur, when the passengers were fast asleep, the eyewitnesses  told JKNT over phone

Rescue operations are under way since early morning and the death toll is expected to rise, railways officials said.

Immediately, there were no details available of the cause of one of the worst railway accidents in the history of railways  in India . There were however some indications that the derailment might have been caused  by a rail fracture .

250 police officials are carrying out the rescue and relief operations.
National Disaster Response Force (NDRF) teams have also reached the spot  for the rescue operations .

Railway Minister Suresh Prabhu has announced ex-gratia of Rs.3.5 lakhs for those killed in derailment and Rs.50,000 for those injured. Prabhu has ordered an a probe saying,”An inquiry team will start investigation for cause of the accident. Guilty won’t be spared.