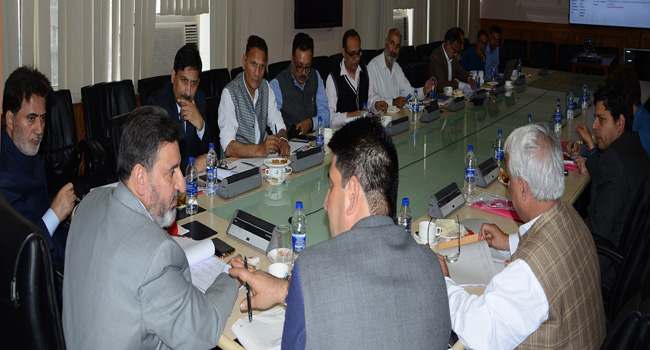 Appreciates district officers for implementing decisions in letter and spirit

Minister for Finance and Labour & Employment, Syed Mohammad Altaf BukhariWednesday reviewed the implementation District Development Board decision of District Anantnag 2015-16 and the action taken report on the commitments of the Chief Minister regarding Anantnag District.

The Minister was informed that 90 percent of the decisions and the Chief Ministers ‘commitments have been completed while the remaining projects will be completed within the shortest possible time.

Bukhari appreciated the officers of the district for working tirelessly and with extra zeal to implement the decisions in letter and spirit and urged them to work with the similar enthusiasm for the development of the state. He asked the minister to complete the remaining works within the shortest possible time.

Meeting was informed that the   decisions of DDB Meeting 2015-16 competed so far included construction of road along old Brengi canal, completion  Anantnag-Achabal portion of Anantnag-Sinthen-Kistwar road, upgradation of Ranipora-Krad road, completion of PHC, Chittergull, completion of water supply scheme Bumzoo Anantnag, identification of land for construction of Solid Waste Management plants for Anantnag and Bijbehara, plugging of leakages of Dadi canal, completion of inspection Hut at Nowshera, construction of gateway and wayside facilities at Qazigund, strengthening of Higher Secindary School Srigufwara, completion of park at Kathsoo, diversion at Rein Chowgund road, bridge on Chowgund road, establishment of Para-Medical College and Nursing College and introduction of technical courses in South Campus of Kashmir University, up-gradation of tourist facilities at Veerinag, macdamization of the premises of Fruit Mandi Batengoo.

Minister informed that Rs 80.87 crores have been utilized on these projects so far and ork is in progress on the remaining works and will be completed in a shortest possible time.

He directed the officers to ensure strict implementation of all other decisions taken in the DDB meeting so as to achieve better results under different state and centrally sponsored programmes.  He said that fulfilling public aspirations remains priority of government and there is need to keep a check on quality of works.