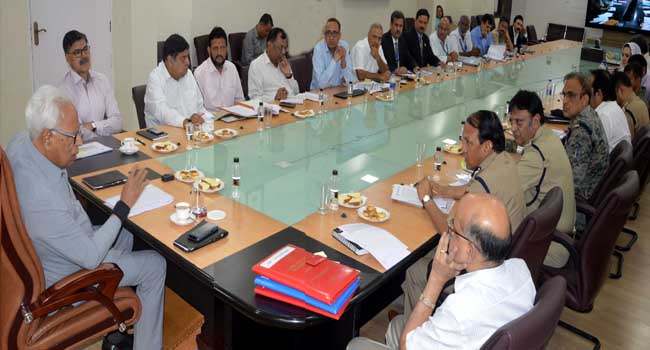 Regarding the starting of night landing operations at Srinagar Airport, Governor was informed that the IAF had provided the required permissions and the work of installation of Runway lights by the Airport Authority of India was at an advanced stage of completion. Governor directed Sh. V.K. Singh, Spl DGP, to ensure that the work to construct accommodation for the Security Forces Personnel to be deployed for maintaining the security of the Airport and surrounding areas, in view of the enhanced timing of the operations, should be completed within 60 days, without fail. He also instructed Divisional Commissioner, Kashmir, to ensure that the work of lighting, provision of toilets and other facilities was taken up immediately and completed by 5th August 2018. Sh. Sahi IG, CRPF, undertook to provide temporary accommodation at the RTC Campus at Humhuma for the troops to be deployed for Airport security duty. Director Airport, Srinagar, was directed to take immediate steps for provision of accommodation to house the additional Security Forces Personnel required to provide security during the entire period of the extended flying operations.

Governor was informed that a number of steps had been taken to improve the comfort and security of the passengers visiting the Airport, which included provision of additional X-Ray Scanning Machines, Toilets and other facilities. Governor directed Commissioner Civil Aviation to ensure that a feasibility study of the proposed Flyover from Humhama Chowk to Airport is got completed within a week, to ease the existing vehicular congestion as well as to ensure dislocating the existing market near the Airport entrance.

The progress of Run Way extension at Jammu Airport was reviewed through Video-Conferencing with Divisional Commissioner, Jammu, and all concerned Civil, Police, Air Force, Army, Airport Authority and other concerned officers. Governor expressed satisfaction on being informed by Sh. Sanjeev Verma, Divisional Commissioner, Jammu that all hindrances obstructing the start of work had been fully resolved and the work of Runway extension and Boundary Wall construction is already underway. Divisional Commissioner informed that the work on the Boundary Wall shall be reduced from 15 to 9 months and that on the Runway from 24 to about 13 months.

Regarding the construction of the new Terminal at Jammu Airport, Governor directed Divisional Commissioner to ensure urgent hand-over of the required land to the Airport Authority of India. Sh. Asgar Samoon, Principal Secretary Animal Husbandry undertook to urgently shift the existing Animal Husbandry and Poultry units to their new locations.

Regarding the establishment of a Green Field Airport for catering to future civil aviation requirements of the State, Governor directed Commissioner Secretary Civil Aviation to identify several possible sites which should be inspected by a multi-disciplinary expert team to determine suitability.

Governor directed Sh. Kansal, Principal Secretary Planning and Civil Aviation to send him monthly progress reports on all the projects which had been reviewed.