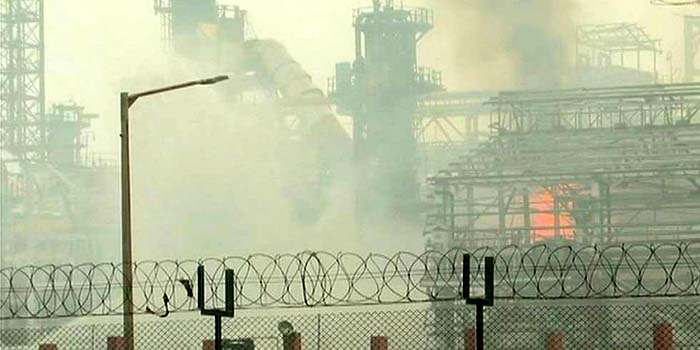 At least 21 persons were injured in a massive fire that broke out in Bharat Petroleum Corporation Ltd (BPCL) refinery at Chembur in the eastern suburbs of Mumbai on Wednesday afternoon, officials said.

According to local eyewitnesses, the fire, which was followed by a series of loud explosions, and a thick black smoke could be seen from several kms away.

BPCL spokesperson said the fire erupted in the compressor shed of a hydrocracker plant within the plant complex.

“The fire is still on but under control. It is being fought by the BPCL fire fighters team,” said the spokesperson.

The Mumbai Fire Brigade also sent at least a dozen fire tenders and five jumbo tankers to battle the blaze.

The 21 injured persons were given first aid at the BPCL Medical Centre and later shifted to a hospital for further treatment.

The cause of the mishap is not known.

There are several residential colonies and slums around the BPCL plant.