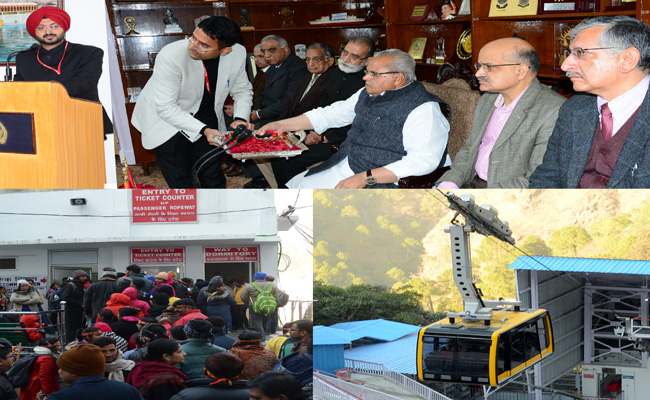 Governor Satya Pal Malik, Chairman of the Shri Mata Vaishno Devi Shrine Board, today inaugurated Bhawan-Bhairon Passenger Ropeway, a high-tech project completed by the Shrine Board for facilitation of the pilgrims visiting the Holy Cave Shrine of Shri Mata Vaishno Deviji. This project was e-inaugurated at a function held at the Raj Bhavan here today.

Speaking on the occasion, Shri Satya Pal Malik complimented the Officers and engineers of the Shrine Board who worked to make this mega project a reality. Sh. Malik also recalled the efforts made by former Chairman and Officers who have remained associated with the project. He advised the Shrine Board to take all possible steps to make the ropeway service hassle free. He particularly emphasised on the rescue and relief part of the ropeway which according to the Governor should be of international standards.

The Passenger Ropeway Project completed by the Shrine Board at a cost of about 85 crore, including its allied infrastructure and related pilgrim-centric facilities, has a carrying capacity of 800 persons per hour and with the completion of this ambitious project, the pilgrims visiting the Holy Cave Shrine of Shri Mata Vaishno Deviji will be able to fulfil their life-long wish of paying obeisance at Bhairon ji Temple which was earlier difficult, particularly for the elderly and specially-abled pilgrims owing to a steep climb to an altitude of 6600 ft. The Ropeway will also reduce the travel time of the one way journey between Bhawan and Bhairon Temple from one hour to just about three minutes. The Board has decided to charge a highly subsidized to and fro ticket of Rs. 100 per passenger to enable the maximum number of pilgrims to avail this facility.

The Bhawan-Bhairon Passenger Ropeway Project has been executed by a consortium of M/s Garaventa AG, Switzerland and M/s Damodar Ropeways Construction Co. (P) Ltd., Kolkata under the consultancy and overall supervision of M/s RITES Ltd. The Electro-Mechanical Components and Cabins of the Ropeway have been imported from Switzerland. The Passenger Ropeway System has been fully equipped with all safety norms as per relevant standards and codes. The Board has established a Ticketing Hall, Automated Fare Collection System Counters, Turnstile Barrier Gates, stairs and Ramp leading to the Ropeway Station and other associated facilities for the pilgrims.  The Passenger Ropeway is Bi-Cable Jig-Back System, having two fully enclosed spacious Cabins with a carrying capacity of 40-45 persons in each Cabin in one go. It also has provision of ventilation etc. The horizontal distance of the Passenger Ropeway is 375 metres, vertical rise of 236 metres and a slope length of 443 metres. It has a complete power back up system at the Drive Station.

The Board at its 63rd meeting held recently approved additional life insurance cover of Rs. 5 lakh for Ropeway passengers which will be over and above the insurance cover of Rs. 5 lakh already available to trackyatris.   It is further pertinent to mention here that a special Puja was conducted at Bhawan on 23rd December in the presence of CEO Shrine Board and other Officers manning the operations after which the facility was operated free of cost for the yatris for accessing passenger flow and management.