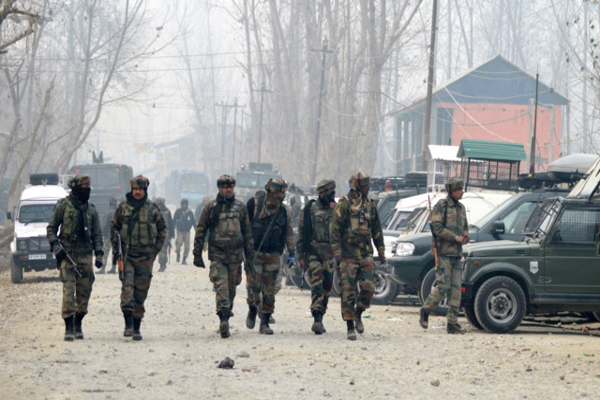 Three TRF terrorists involved in a number of subversive activities including the killing of two teachers,civilians and two police officers were neutralized in an encounter at Rambagh Srinagar today evening.

The killing of these terrorists is a major success for J&K police as they were planning to carryout more terror attacks in central Kashmir particularly in Srinagar city.

Acting on a tip off regarding the movement of terrorists Srinagar Police immediately swung into action and established a special Naka to track them down. The terrorists were traveling in a car which Was signalled to stop by the Naka party. The terrorists did not stop and instead opened fire on the Naka party which was retaliated, triggering an encounter. In the ensuing encounter three terrorists of TRF outfit were killed. The killed terrorists were later on identified as Mehraan Yaseen Shalla son of Mohd Yaseen Shalla resident of Jamalata, Arafat Ahmad Sheikh son of Mohammed Maqbool Sheikh resident of Nikloora Litter Pulwama and Manzoor Ahmad Mir son of Late Sonaullah Mir resident of Babhar Pulwama. Arms and ammunition was recovered from the encounter site.

As per police records, Mehran Yaseen was involved in several terror crime cases including grenade attack at Barbar Shah Srinagar on 26/06/2021 in which one civilian namely Mudasir Ahmad Bhat resident of Hanjigund Beerwah got killed & three other civilians got critically injured.He was involved killing of Meeran Ali Sheikh at Bulbul Lanker Nawa Kadal on 27/07/2021, and of PSI Arshad Ahmad at Khanyar on 12/09/2021.He was also involved in killing of School Principal Supinder Kour and teacher Deepak Chand of Government Higher Secondary School, Khankah Noorbagh Sangam on 07/10/2021. Prior to joining terror ranks, several cases regarding his involvement in stone pelting incidents are also registered.

Arafat Ahmad was also involved in several terror crime cases including killing of a non-local labour at Litter area of Pulwama on 16/10/2021.

Manzoor Ahmad was involved in transportation of Foreign terrorists from South Kashmir to Central / North and Vice-Versa through his strong OGW network in order to strengthened LeT/TRF outfit in Kashmir valley .He was also involved in collecting of funds on the name of LeT/TRF outfit and was instrumental for strengthening the LeT/TRF outfit.