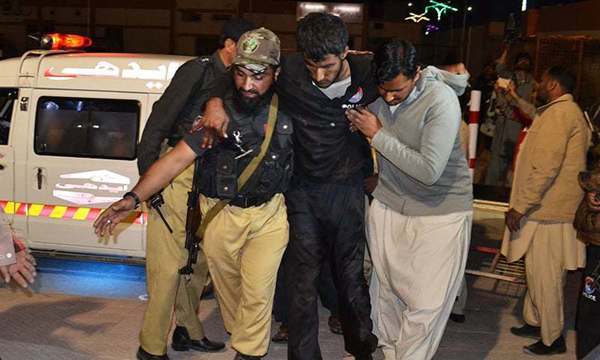 As REported in  Dawn Newspaper

Three gunmen burst into the sprawling academy, targeting sleeping quarters home to some 700 recruits, and sent terrified young men aged between 15 and 25 fleeing.

Most of the deaths were caused when two of the attackers blew themselves up. The third was shot dead by Frontier Corps (FC) troops. At least 120 people were injured, DawnNews reported.

“I saw three men carrying Kalashnikovs… they were in camouflage and their faces were hidden,” one cadet told reporters. “They started firing and entered the dormitory but I managed to escape by climbing over a wall.”

Balochistan Home Minister Sarfaraz Bugti confirmed to reporters that there had been three attackers.

“They first targeted the watch tower sentry, and after exchanging fire, killed him and were able to enter the academy grounds,” he said.

The attack on the Balochistan Police College, around 20 kilometres east of Quetta, began at around 11:10pm Monday, with gunfire continuing to ring out at the site for several hours.

Major General Sher Afgan, chief of the paramilitary FC in Balochistan, which led the counter-operation, said “the attack was over in around three hours after we arrived”.

“The operation needed to be conducted with precision therefore it took us four hours to clear the area completely.”

“There were three terrorists and all of them were wearing suicide vests,” he said. “Two suicide attackers blew themselves up, which resulted in casualties, while the third one was shot dead by our troops.”

He added that the militants had been communicating with their handlers in Afghanistan.

Afgan said communication intercepts showed the attackers belonged to LJ’s Al-Alimi faction, which is affiliated with the Tehreek-i-Taliban Pakistan (TTP). The group itself, however, has not claimed the attack.

The area was plunged into darkness when a counter-offensive was launched, and security personnel threw up a cordon while ambulances zoomed in and out, taking the injured to hospitals. Military helicopters circled overhead.

The cadets were rescued from the college following an operation carried out by Special Services Group (SSG) commandos.