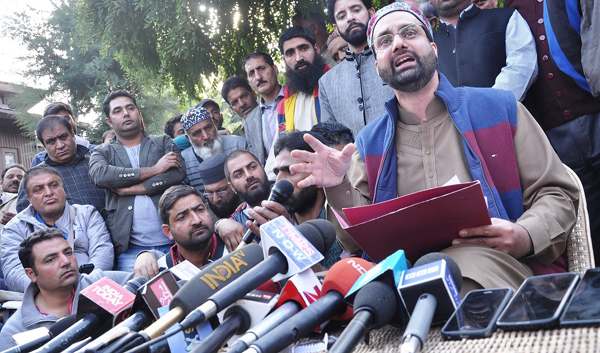 In his first direct  face to face interaction  with media in  more than 100 days of Kashmir unrest, All parties Hurriyat Conference chairman Mirwaiz Umar Farooq  on Tuesday declared that the dialogue cannot be held under the bayonets of guns, repression of arrests and unheard of atrocities in the Valley.

“ The dialogue can be held only when  all the prisoners are out of jail, and the PSA detenues are  back in their homes  without any charges against them and  the spree of crackdowns and arrests is brought to an end ,” the Mirwaiz told media a day after his release from subjail in Cheshma Shahi .

Mirwaiz Umar Farooq also threatened to defy curfew and lead prayers at historic Jamia Masjid where  congregational prayers have not been held for the past 24 weeks because of curfew, restrictions and shutdowns.

The Mirwaiz released after nearly two months of arrest at sub jail Cheshma Shahi  told reporters on Tuesday that he would not be deterred by the restrictions and curfew  on  October 28  and  march to offer prayers at Jamia mosque.

“ This is our religious duty and no one can impose restrictions on that,” he said and regretted that the Government did not allow the  prayers at the mosque even on Eid-ul-Zuha.

Speaking in an excited tone as he recalled that how the state government had converted the entire Kashmir to a “torture chamber”, the Mirwaiz said that  no dialogue can be held under coercion. “ The government of India must understand that we are a respectable nation and we are fighting for our rights . We cannot be trampled and trammeled  to hold dialogue,” he said and   made it abundantly clear ,” That is our stand.”

He said that either the solution to  Kashmir issue would have  to be found  within the parameters of the United Nations Security Council resolutions that promise a referendum to the peoples of the state  or it can held through dialogue involving Pakistan and “ true representatives” of Kashmiris as principal parties. “ Nothing short of it is acceptable to us,” he declared.

But, at the same time, it was  necessary that the entire “ resistance leadership  meets and devises a  complete strategy to move ahead . That is must before we review our current stand of agitation calendar,” the Mirwaiz said amidst cheers by his supporters who were present at the time of his press conference this afternoon.