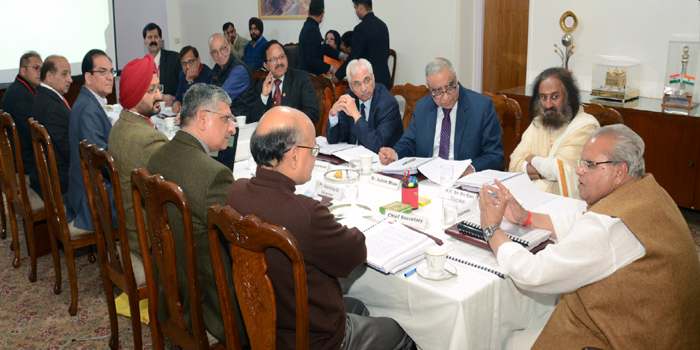 CCTV Surveillance Project to cover entire track, Fire Hydrant System to be installed to tackle forest fires, STPs to be extended to all toilets in phased manner

The 64th meeting of Shri Mata Vaishno Devi Shrine Board was held at the Raj Bhavan here today under the chairmanship of Governor Satya Pal Malik, Chairman of the Shrine Board.

The Governor, while welcoming the Members of the recently reconstituted Board, complimented the earlier Board Members and lauded their commitment and valuable contributions in creating and continually upgrading facilities for convenience of the pilgrims.

While reviewing the Income and Expenditure statement of the Board, the Chairman pointed out that Revenue Income (i.e., excluding Interest and Dividends) should be either greater or equal to the Revenue Expenditure, excluding the University grant. In total, the expenditure should be less than or equal to Total Income. In view of the new AIIMS and five new medical Colleges coming up in the State, the Board decided to reverse its earlier decision of setting up a Medical College. The Board also approved a formal donation policy to allow donors to donate as per laid down guidelines.

Several important decisions were taken in the meeting for further extending better facilities to the yatris on the yatra route. The meeting approved installation of CCTV Surveillance System on the entire track from Darshani Deodi to Bhawan which will be implemented on turnkey basis. Once in place, this system will not only help in monitoring the movement of the pilgrims and strengthening overall security measures, it will also be of immense support in case of any emergent situations to provide real time assistance to Shrine and local administration.

The Board reviewed the to-date status of installation of a hi-tech Multipurpose Audio System on Tarakote Marg from Katra to Adhkuwari which is being implemented for facilitating on-foot pilgrims who use the scenic Tarakote Marg for their journey to the Holy Cave Shrine of Shri Mata Vaishno Deviji. This Audio System will be installed through M/s BOSE Corporation India Pvt. Ltd. at an estimated cost of over Rs. 4.55 crore, which includes operational and maintenance cost for 5 years. 550 speakers will be installed along the Tarakote Marg for the facilitation of pilgrims and will become operational by mid of June this year. It will play devotional music and spiritual songs, which will comprise “Chants”, “Mantras”, “Stotras”, Bhaints and devotional music in Dogri language.

The work on installation of dedicated Fire Hydrants from Bhawan to Adhkuwari via Himkoti and its extension along the Tarakote Marg also came up for review of the Board. The installation of Fire Hydrants has been taken up on priority basis to mitigate fire incidents during summer season. The project envisages lifting of treated waste water from Bhawan STP to reservoirs of 50,000 gallons capacity each at Hut Station, Bhawan, Saket, Himkoti and Adhkuwari. This project is estimated to cost Rs. 3.50 crore and is slated to be completed by the PHE Department by May 2019. Further, the treated water so lifted in normal course will be utilised for floriculture, washing of track, construction works etc.

The Board approved another important project for installation of stand-alone Packaged Sewage Treatment Plants (STPs) for the Toilet Blocks on the yatra route. Since it is not feasible to connect the existing geographically scattered Toilet Blocks with a centralised STP, as such, the need has been felt for installing stand-alone STPs in 25 Toilet Blocks with an estimated cost of Rs. 6.65 crore in phased manner. The installation of these STPs will also facilitate re-use of treated water, which can be further used for flushing of cisterns, civil constructions as well as gardening purposes. It is pertinent to mention that the Board has already commissioned a number of STPs of varying capacities.

The Board also had a review of status of the installation of underground cabling work from Katra to Bhawan and the surrounding areas which already stands allotted to a Contractor by PDD on the basis of tendering. The meeting was apprised that this project involves an estimated cost of over Rs. 78 crore, which will be partly funded under the PMDP and partly by the Shrine Board. This high utility project will have SCADA compliance based monitoring system of the electric network.

The Governor directed the CEO to ensure that all the projects be completed as per the envisaged timelines for largely facilitating the pilgrims.

The Board also took note of the launching of E-Surveillance Radio Frequency Identification Device (RFID) based Tracking and Pre-paid system for yatris for hiring the services of Ponies, Pithoos and Palkis on the track leading to the Shrine, which has been launched recently.

The meeting also took stock of the construction of the Shri Mata Vaishno Devi Nursing College Complex coming up at Kakryal and emphasised the need for timely completion of its hostels and other infrastructure coming up in the Phase-I involving an estimated cost of Rs. 53 crore. The meeting also reviewed the functioning of the Shri Mata Vaishno Devi Narayana Superspeciality Hospital, Kakryal, Shri Mata Vaishno Devi Gurukul, Charan Paduka, Katra and the Shrine Board’s Sports Complex. The Board also decided to set up a day care Centre of NH Hospital by hiring accommodation in order to provide facilities like Dialysis, ECHO, TMT, OPD etc. in Jammu city. The said Centre will work as spoke to the main Katra hospital.

Earlier, the CEO gave a detailed presentation on the to-date status of varied activities of the Shrine Board and the action taken as regards the implementation of various decisions of the previous meetings of the Board.