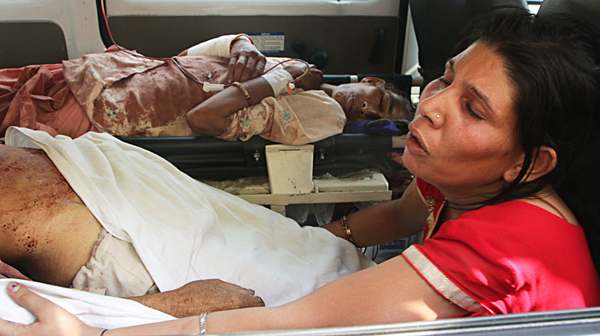 The official sources told that eight civilians, were killed and over a dozen injured in Pakistan firing at several places from Arnia to Samba along International Border (IB) and Line of Control (LoC) in Jammu region.

A nineteen years old girl, Ravinder Kaur, of Jerda village in Ramgarh sector was killed while cooking in her kitchen. According to sources a mortar fell and blasted her house. She was shifted to Ramgarh hospital where she was declared dead.

Two boys — Rishav and Abhi about 4-5 years old and a woman Hanju Devi were killed in Ramgarh sector.

Two women got killed in firing from across LoC in Tarkundi area of Rajouri district.

From Arnia to Samba, exchange of fire is happening at about six places along the IB  in which over a dozen civilians are injured including five women.

Paksiatan started firing at SM Pura and Narayanpur posts of Ramgarh sector in Samba district from 6.30 am which later spread to Arnia sector too.

“BSF is responding befittingly to the Pakistani firing,” sources told.

Meanwhile, army sources told that  Pakistani troops started firing in Naushera sector of Rajouri district across LoC from 5.30 am in the morning. “They (Pakistani army) are using small arms, automatic weapons, 82mm and 120 mm mortars”. the sources added , “Indian Army is responding befittingly and appropriately.”

The firing later spread to Mendhar sector of Poonch distrci where three civilians got injured, one of them critically.

The civil administration has ordered closure of all schools near to IB and LoC till further orders as precautionary measure. The government schools in such areas are 174 while many private schools would also be bound by this order.

Thousands of border villagers are migrating to safer areas inside.