Mehbooba was opposed to hosting At Home on I-Day 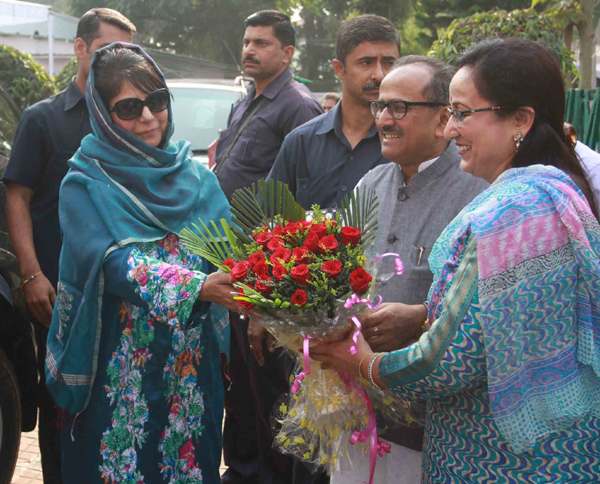 Deputy Chief  Minister  Nirmal Singh  hosted “ Diwali Milan” party on  Monday , while the soldiers  and civilians were dying on borders and thousands of  families uprooted from borders ,  should have weighed for these celebrations against the backdrop of  Chief Minister Mehbooba Mufti’s reluctance to host traditional “ At Home” on the Independence- Day this year.

Mehbooba Mufti who had a bad start  while unfurling the national tricolor  at the Bakshi Stadium , Srinagar , as the flag instead of fluttering had  fallen on the ground, was  not interested in hosting the I-Day At Home , a tradition associated with the  national festival.

Sources told JKNT that  Chief Minister had mulled the cancellation of the  At Home , citing the unrest following the killing of  militant leader  Burhan Wani .  She shared her perception with some of  her colleagues but it was pointed out that the state was no in mourning , hence the At Home cannot be cancelled.

It was after this, that she had reluctantly agreed to host the  At Home on August 15 this year.

Nirmal Singh, however, had no qualms about hosting the  Diwali Milan  party  irrespective of the fact that one  more soldier and an elderly lady lost life in the  Pakistani firing on the Line of Control .  On top of it, an official hand out was issued  citing the names of his guests, including Chief Minister  Mehbooba Mufti, few BJP ministers and legislators.