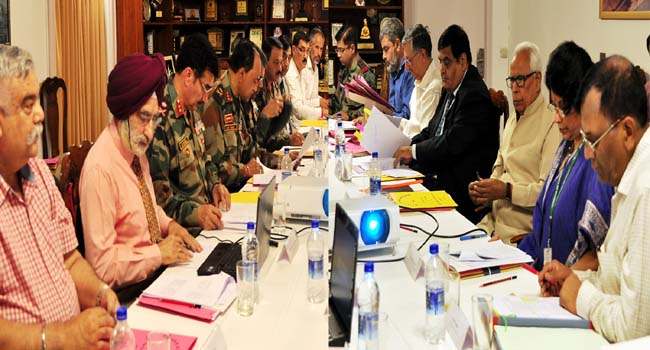 The Annual Meeting of 80th J&K Rajya Sainik Board (RSB) followed by the 65th meeting of State Managing Committee for Funds (SMC) was held at Raj Bhavan, Jammu, under the Chairmanship of Governor N.N. Vohra.

In his opening remarks Governor Vohra expressed his appreciation for the sustained support provided by the Union and State Governments, Northern Army Command and all stakeholders in J&K for promoting the welfare of over 1,05,000 families of ex-Servicemen in the State. He complimented Brig. Harcharan Singh (Retd.), Secretary RSB, for collecting Flag Day Funds of Rs. 42 lakh in the first four months of this calendar year as against the total collection of Rs. 52 lakh in 2017. The Board was informed that, at the request of the Governor, the Department of ex-Servicemen, Ministry of Defence, has enhanced the Penury Grant paid to the ESM/Non-Pensioner Widows (of above 65 years of age) from the existing Rs. 1000 to 4000 per month. The Board approved that Flag Day Funds be used for also increasing the Penury Grant  payable to Non-Pensioner Widows ( of below 65 years of age) from the existing Rs 1000/- to Rs 4000/- per month.

Governor advised that the Sainik Welfare Department should involve the State Government and the Armed Forces to organise Fauji Melas for raising awareness of the society about the role of the Defence Services. He also advised Secretary RSB to organise Patriotic Song Competitions in co-ordination with State School Education Department in different schools of the State.

Governor advised Secretary RSB to complete the digital database of all ESM and their dependents in the State by March 2018 to enable implement the planning and execution of schemes for the welfare of ex-Servicemen.

Governor emphasised the need for an early review of the existing recruitment framework to facilitate re-employment of qualified ESM for various Central and State Government jobs and advised Sh. R.K. Goyal, Principal Secretary Home, to study the model adopted by Himachal Pradesh in this regard.

RSB approved several important agenda items which included: revision in grant of lump sum amount paid to Chakra Series Awardees of J&K State; allotment of temporary accommodations at RS Pura (Miran Sahib) and Reasi to ESM/Widows within existing Army land till Departmental accommodation comes up in State Government land; and also approved creation of 02 posts of Deputy Directors at RSB (J&K) on contractual basis as per the recommendations of Sub-Committee Report of GoI (Ministry of Defence) on standardisation of Sainik Welfare.

Principal Secretary Home informed the Board that the State Government has sanctioned establishment of four Zila Sainik Welfare Offices (ZSWOs) and the sanction for Additional Welfare Organisers is being cleared shortly.

Secretary RSB made a detailed presentation and provided details of the various measures taken for promoting the welfare of the ex-Servicemen and the financial status of the Board.