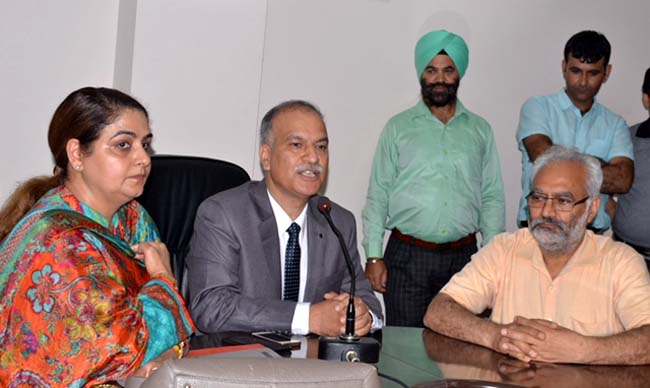 As per an official communication received from the Governor’s Secretariat, the Hon’ble Chancellor Sh N. N Vohra has appointed Prof Manoj K Dhar, a distinguished plant scientist, academician and Son of the Soil, as the Vice Chancellor, University of Jammu for a period of five years. The formal order to this effect was issued by Dr. Meenakshi Kilam, Registrar, University of Jammu .

Speaking on the occasion, the new Vice Chancellor sought the cooperation and support of all the stake holders for taking the University of Jammu to the higher levels of excellence.

On this occasion, the University fraternity welcomed Prof Dhar and acknowledged the distinguished services rendered by Prof. R. D. Sharma, an outgoing Vice Chancellor and also conveyed their best wishes to him.

Speaking on the occasion, Prof. R. D. Sharma thanked the University fraternity for the support and cooperation extended to him during his tenure as the Vice-Chancellor, University of Jammu and also hoped that the University will continue to work with the same zeal and enthusiasm in the times to come.

Born on 17th November 1964, Prof. Manoj K. Dhar started his career as Lecturer in the Department of Botany, University of Jammu.

An academician of international repute, Prof. Manoj K. Dhar has around twenty five years of rich professional experience as an educationist, researcher and as administrator.

Prof. Manoj K. Dhar, till now Professor at School of Biotechnology, University of Jammu was elected as Fellow of the National Academy of Sciences, India in 2017.

Pertinent to mention, Prof. Dhar was elected as Fellow of the National Academy of Agricultural Sciences during 2016. His work on Genomics of Plants, especially the plants of regional importance such as Apple, Saffron and Isabgol has been widely acclaimed. His contribution towards understanding the origin of Specialized Chromosomes is pioneering and has been cited by peers throughout the world. Besides, he has also made notable contribution in identifying the genetic basis of rare human Genetic disorders in some population groups of J & K State.

Prof. Dhar and his team are actively involved in developing strategies for removing the bottlenecks in increasing the production of Saffron, the world’s costliest spice, cultivated in Kashmir and Kishtwar regions of the State.

Among those present on the occasion included Deans, Directors, Heads, Registrar, faculty members of various departments, officers of the University and students/ scholars from the teaching departments.