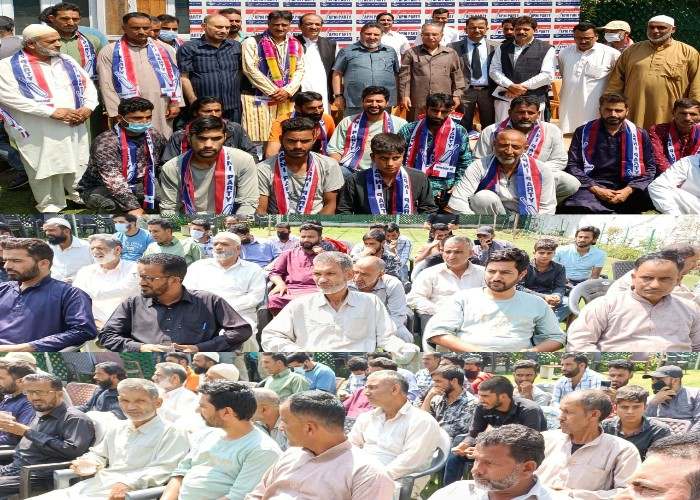 Apni Party President Syed Mohammad Altaf Bukhari Tuesday said that “our convincing agenda and realistic policies are alluring people and political leadership from other parties to join the Apni Party.”

He was speaking in a joining event at the party headquarters in Srinagar, wherein several leaders and political activists from AAP, NC, PDP, and Congress formally joined Apni Party today.

On the occasion, while addressing to the new entrants Syed Mohammad Altaf Bukhari said, “I feel pleased to see that people are realizing the fact that Apni Party pursues a realistic agenda, which is to work for the restoration of statehood to J&K, and to strive for its peace, prosperity, and development.”

He added, “Besides new faces, people and political leaders even from traditional parties such as National Conference, Peoples Democratic Party, Congress, and others have been joining our hands since the inception of Apni Party more than two years ago. We see new joining into the Apni Party fold frequently, which indicates larger public acceptance to our clear-cut agenda and policies.”

Greeting the new entrants into the party fold, Apni Party President said, “I warmly welcome you into Apni Party and promise you that this party will not let you down. We are pursuing an unambiguous agenda of making Jammu and Kashmir peaceful, prosperous and developed. Our party leadership has resolved that we will firmly endeavor for the restoration of statehood to J&K, and political and economic empowerment of its people. And, we will peruse our goals with our strong political will and through peaceful means.”

He added, “Unlike some traditional political parties, we do not believe in evil politics and misleading slogans which have been pushing people, especially youth to a situation wherein they landed either in jails or in graveyards. We are working for the well-being and a better future of our youth. Our key agenda is to make a conducive atmosphere for sustained peace, durable prosperity, and economic development of J&K.”

Taking a dig at traditional politicians for their deceptive politics, Syed Mohammad Altaf Bukhari said, “Some politicians are trying to mislead common people by claiming that they will get abrogated constitutional articles of 370 and 35A back. Let me tell you that only Supreme Court has the power to undo what was done on the unfortunate day of August 5, 2019. No politician has the authority and power to get these articles back. Thus, nobody should allow these politicians to mislead and befool the people.”

He further said, “Seeing that jobs and land had become vulnerable due to the abrogation of Article 370 and 35A, Apni Party leadership took an imitative to meet Prime Minister and Home Minister in New Delhi and succeeded to convinced them to announce that jobs will remain only for the locals and agricultural land can only be mutated between the residents of J&K. By this we protected land and jobs for the J&K people and subverted the dangerous caused by the abrogation of these articles.” “Now we will keep striving to ensure J&K’s statehood is restored,” He added.