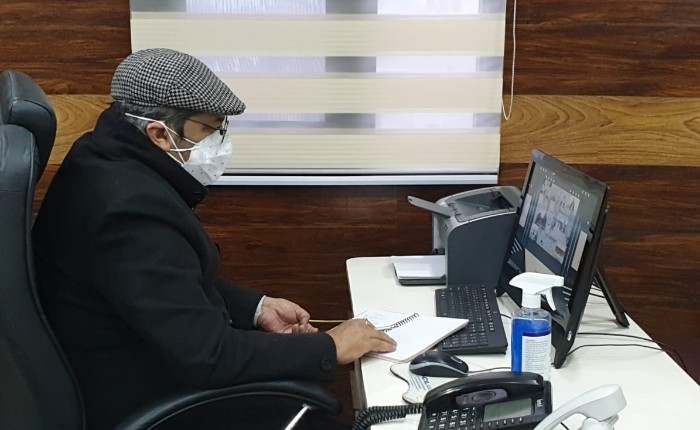 The two-day summit that began in New Delhi on January 15 was inaugurated by Union Minister of Commerce and Industry, Consumer Affairs and Food and Public Distribution, Piyush Goyal.
The Summit was organized by the Department for Industry and Internal Trade (DPIIT), Ministry of Commerce & Industry.

The objective of the summit is to set up an ecosystem to boost entrepreneurship and innovation, enabling global linkages and partnerships, celebrating the progress made and define the way forward to strengthen the startup ecosystem.

On the sidelines of the event, before the start of Summit, Advisor Baseer Khan expressed his satisfaction over the way Industries and Commerce department is carrying out activities in line with the facilitations being provided to startups in Jammu and Kashmir.

The Advisor noted that the Summit will provide a platform to the startups and young minds from around the world to come together and collaborate to work collectively with new ideas, innovation and invention. The Advisor expressed satisfaction over the role being played by the Union Territory of Jammu and Kashmir in strengthening the startup ecosystem.

The journey of startups in Jammu and Kashmir and the achievements that come through promoting entrepreneurship in educational institutions through the industrial and academic collaboration to promote entrepreneurship is made smooth with the efforts of the department of industries and EDI.

The Advisor said that the youth of Jammu and Kashmir have a penchant for innovation and this Startup opportunity will led to outstanding results.
The Advisor gave a brief about the Start-up Policy of Jammu and Kashmir that envisions the creation of 500 new Start-ups in next 10 years, besides establishing Incubators, fabrication and innovation labs and creation of two Start-up Hubs in Kashmir and Jammu.

To sensitize people about the Start-up policy and scout potential innovative Start-ups, the Advisor said that a comprehensive outreach program of conducting boot camps across all the districts of the UT has already been completed.

Under Atal Innovation Mission (AIM), NITI Aayog has sanctioned an Incubation Centre in favour of JKEDI. He further added that for Nurturing Start-ups and Capacity building of Mentors, two Pre-incubation Orientation Programmes have already been conducted both in Kashmir and Jammu.

The Advisor also said that UT of Jammu and Kashmir is working towards collaborating with National Research Development Corporation (NRDC) for patenting and Commercialization of Innovative technologies.

While taking the on-spot review of the working of JKEDI, the Advisor appreciated the role of JKEDI in facilitating the establishment of 14000 enterprises by the Institute. He also stressed that more and more Start-ups should be provided incubation facilities within the Institute.

Director JKEDI expressed his gratitude to Advisor for visiting the campus and apprised him about the working of the Institute.