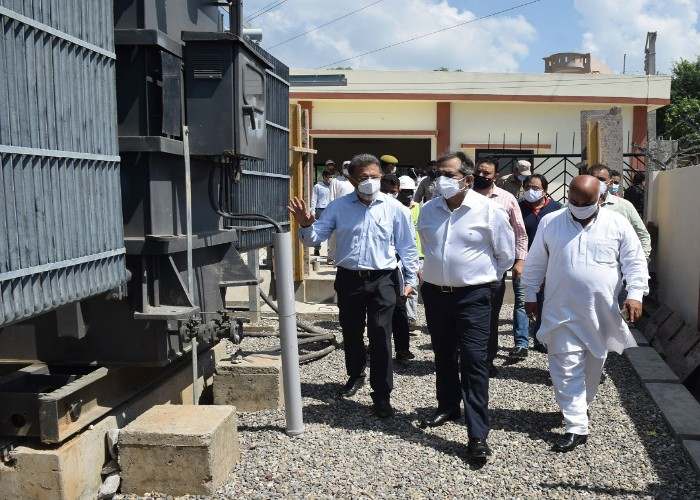 Advisor to Lieutenant Governor, Baseer Ahmad Khan, along with senior functionaries of Power Development Department and its allied wings today reviewed the ongoing construction works on 33/11 KV substations at Channi Himmat, Chowadi and Bajalta and various other places to review the progress against the timelines already fixed.

Managing Director, JPDCL, Gurmeet Singh briefed about present status of the ongoing works. He said that it will also provide relief to existing overloaded 33/11 KV substations in the areas.

The Advisor gave on spot directions to the officers to complete all the projects within the stipulated time frame. He said no laxity on non-adherence to the time lines given shall be tolerated. Adding to these directions he said all the projects should comply to the standards and there should be no qualitative compromise on any of the works undertaken.

Advisor, while speaking on the occasion said that the completion of these projects will largely benefit the population and give reliable power supply and impoved voltage to the consumers.

While directing the officers to have proactive approach, the Advisor stressed upon the officers to prepare for the coming winters the road map for which has been already laid down by him in the recently held meeting. He directed the officers to focus on areas of concern and keep rapid action teams ready and well prepared for the coming winters so as to respond to the damages in emergency situations. The Advisor asked the officers to keep a clear curtailment schedule in place for the winters and give it wide publicity so that people come to know well in advance. The Advisor also asked to put in place a foolproof mechanism to ensure that the upper and far-flung areas especially Doda, Kishtwar, Poonch and Rajouri and some areas of Udhampur and Ramban which receive heavy snow fall do not face frequent interruptions and outages.

Advisor directed the concerned to ensure the availability of buffer stock of transformers at every Electric Division so that same could be dispatched to the vulnerable areas and upper reaches and time is not wasted to replace the damaged transformers. He further added that the conductor, wires and rotten poles should be immediately replaced wherever required. All the directions given in the meetings to provide better services to the consumers should be followed in letter and spirit.

The Advisor further directed the officers to ensure prompt remedial measures on issues faced by the public, he directed them to get daily feedback from the field functionaries and take prompt action on the issues faced by the people. He laid stress on the robust grievance redressal mechanism. He emphasized on the quick response to the grievances of general public and functionaries should review the mechanism on weekly basis. The Advisor said that the evaluation of working of each officer will largely depend on implementation of these directions and will constitute as an important parameter to gauge the performance of each officer.

While directing the officers to complete the process of branch cutting of trees across the corridors through which the power lines pass within the timelines set for two phases of branch cutting, the Advisor emphasized on the officers to have the action plan, which is already in place, implemented in letter and spirit as directed by him in the meeting taken in this regard.

The Advisor stressed on action against the power theft and the Transmission and Distribution losses. He directed the officers to make a list of highest and the lowest loss bearing divisions so that action is taken against the non-performing officers.