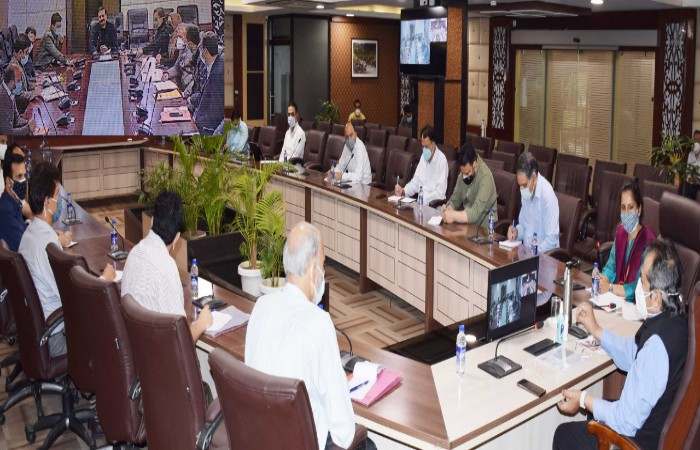 Advisor to Lieutenant Governor, Baseer Ahmad Khan, today had a detailed review of functioning of Industries and Commerce Department in an officers meeting held here today to work out multi-pronged strategies towards further strengthening of ‘Investment Ecosystem’ in the Union Territory of Jammu and Kashmir.

Advisor exhorted upon the officers to prioritize the aspirations of the entrepreneurs while putting in concerted efforts for making J&K the most investor friendly Union Territory. He said that strenuous efforts have to be made at all levels to encourage and facilitate people who want to join the wagon of industrial sector here adding that land development and allotment policy has given a shot in arm of the industries department and will pave way for a lot of activities in the industrial sector here. He said that everybody is enthusiastic about the new Industrial Policy and directed the officers that single window clearance facility is provided to Industries and entrepreneurs in real sense with a commitment to promote Ease of Doing Business by streamlining different processes and approvals required to establish and operate a business. He also asked them to focus on e-Commerce and creation of avenues besides market availability of products.

Advisor asked the officers to do proper mapping of encroachments that have taken place on Industrial land and take immediate measures in tandem with respective district administrations to retrieve the occupied land.

Regarding revival of sick Industrial units here, Advisor directed the officers to formulate a comprehensive policy for revival and rejuvenation of those units which have the potential. He asked the Directors of both the provinces to prepare detailed Job chart for the General Managers manning the districts and directed them to be proactive at all levels in the chain of command. He directed that the GMs should move and resort to serious kind of interactions, seminars, inspections and make people understand the new policies rolled out for uplifting of Industrial sector by the government, pursue cases of entrepreneurs at different levels and play the role of a facilitator. He said that they should present a fortnightly diary to the Directorate so that we remain connected to the ground and abreast with the issues being faced by the entrepreneurs.

Advisor said that we should be clear and updated with regard to the potential of a particular district which provides the framework for value chain development and alignment of support infrastructure. He directed the officers to identify district wise specific investment sectors in consultation with the various stakeholders of that particular area.

Emphasizing the need for awareness campaigns at district levels, he directed the officers to develop a group that will connect with the department and indicate the market surplus. He said that this will liberate the people, associated with different trades, from the clutches of middlemen and the product will be taken directly from the source thus opening huge market opening for everybody.

While reviewing PMEGP, Advisor stressed upon both the Directors to make sure that the General Managers conduct regular meetings and review of cases with the Bankers to ensure that the case sponsored are actually taken to the logical conclusion through actual disbursement and follow up. He emphasized upon the need to hand hold the PMEGP beneficiaries so that the small investments lead to employment generation at the ground level.

Advisor also emphasized on observance of SOPs regarding Covid saying that all guidelines issued by the government from time to time have to be followed in letter and spirit.