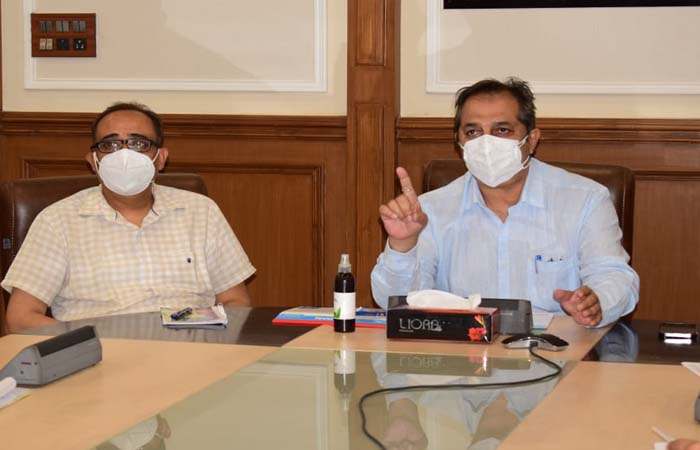 Advisor to Lieutenant Governor, Baseer Ahmed Khan, today chaired a high level meeting to review functioning of Power Development Department in Jammu as well as Kashmir division besides assessing progress on projects being executed under CAPEX and Centrally Sponsored Schemes in the UT.

Advisor Baseer Khan took a detailed review of working of Power Development Department as a follow up to the instructions issued by the Lieutenant Governor in the recently held meeting.

Reviewing action plan of the department, Advisor emphasized upon the officers to put in place all necessary arrangements to ensure adequate power supply to consumers during the coming winter season. He directed the officers to conduct audit of basic infrastructure at both divisions and work on the gaps in advance to overcome all the shortcomings. He asked the officers to strictly adhere to the timeline set by the Lieutenant Governor for accomplishing all the tasks needed to be put in place for forthcoming winters.

Baseer Khan said that he shall be taking review of all the activities and also conducting physical verification on the spot personally during his field visits on fortnightly basis. He added that the department should live up to the expectations of consumers.

Advisor also reviewed the present status of power distribution in Jammu as well as Kashmir division. He stressed on ensuring the constraints are overcome besides asking the officers to remain alive to the demands and expectations of general public.

Baseer Khan directed the officers from both divisions to focus on areas of concern and keep rapid action teams ready and well prepared so as to respond to the damages in emergency situations. He asked the concerned to keep a clear curtailment schedule in place and give it wide publicity so that people come to know well in advance.

Advisor also reviewed the works being carried out under CAPEX as well as CSSs and was informed that the works are in progress and expected to be completed within the timelines as already set in the previous meeting chaired by the Lieutenant Governor.

Advisor also asked to evolve a foolproof mechanism to ensure that the upper and far-flung areas especially Doda, Kishtwar, Poonch and Rajouri besides areas of Kashmir division which receive heavy snow fall do not suffer power shortage during the winter season. He said all contingency plans should be put in place for averting any breakdown.

Advisor directed the concerned to ensure the availability of buffer stock of transformers at every Electric Division so that same could be dispatched to the vulnerable areas and upper reaches in time.

He directed the officers to get daily feedback from the field functionaries and ensure quick response to the grievances of general public.

Advisor directed the officers to complete the process of branch cutting of tree across the corridors through which the power lines pass within the timelines set for two phases of the action plan.

Principal Secretary briefed the meeting about the steps being taken up by the Power Development Department to ensure better services on account of electricity to the consumers. He gave a profile of present status of various ongoing works besides physical and financial achievements. He also apprised about various measures being put in place for further improvement of power scenario in JKUT.