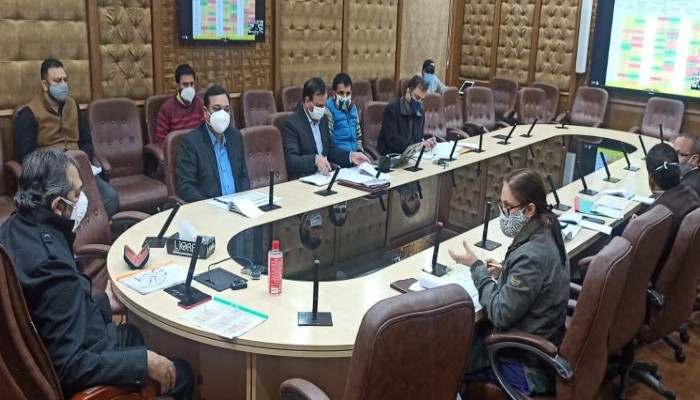 Advisor had physical and financial review of MGNREGA, PMAY (G) besides some other departmental concerns were also taken up for discussion in the meeting. He directed the authorities to monitor the progress made by each district regarding implementation of the schemes and submit progress reports accordingly.

Commissioner Secretary, Rural Development and Panchayati Raj, Sheetal Nanda, presented a detailed presentation giving a cumulative progress under different schemes being implemented in the Union Territory. She presented the District wise/ Panchayat wise status of works taken up under MGNREGA, PMAY and the works on panchayat ghars in the districts.

Regarding the PMAY, the Advisor directed the officers to hold intensive review meetings on regular basis so that the guidelines and timelines are strictly adhered to. He directed the Directors from both divisions to take daily reports from the Superintending Engineers and submit the same to the Commissioner Secretary for follow up action accordingly.

While reviewing the progress, the Advisor asked all the concerned officers to gear up their efforts to achieve the projected targets, particularly in all the districts which are lagging behind, so that objective of the scheme is achieved.

While reviewing the performance indicators of MGNREGA, the Advisor directed them to prepare a calendar of activities regarding uploading of material bills and geo-tagging. He directed the SEs to share regular feedback to the concerned Directors and then weekly reports will be submitted to Commissioner Secretary and action will be taken accordingly.

While reviewing the progress on panchayt ghars, the Advisor directed the SEs to visit each and every district so that all the panchayt ghars are completed well within the deadline. He asked them to prepare a calender indicating completion dates.
Taking serious notice of poor performance in some districts, the Advisor instructed both the Directors to seek explanation from the concerned and fix responsibility for the same.