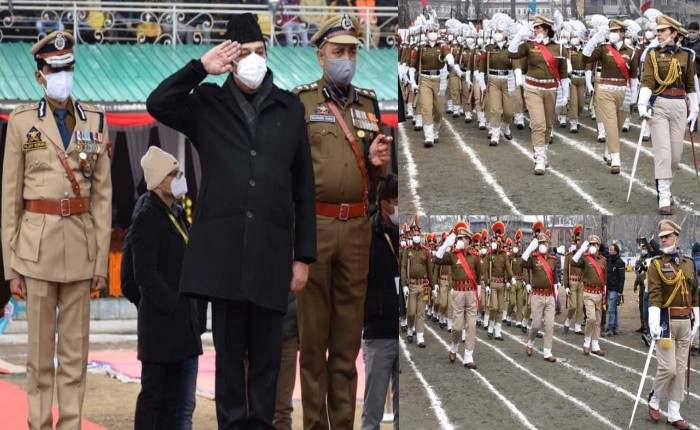 Advisor to Lieutenant Governor, Baseer Ahmad Khan, today unfurled the Tricolor and took salute at the march-past during Republic Day celebration at S.K stadium, Srinagar.
Later, Advisor inspected the parade on the occasion.

Speaking on the occasion, Advisor said that Jammu and Kashmir is marching fast towards rapid growth and development and the Government of India is leaving no stone unturned to make the UT progressive and prosperous.

“On this great occasion, I would like to highlight some major achievements of government like recently launched healthcare scheme Sehat under which each individual will get Rs. 5 lakh cover as health benefit across the country,” asserted the Advisor. He also made a mention of other healthcare measures like establishment of new medical colleges and BSC nursing colleges in the UT,” said Advisor.

He said that the J&K administration exhibiting great courage and prompt response fought the unseen war against Covid-19 pandemic. He praised all Deputy Commissioners, health functionaries, doctors, para-medical staff, other concerned departments for fighting the pandemic together.

He said as the 70 percent of population is dependent on agriculture and its allied sectors, all efforts are afoot to ensure target of doubling the income of farmers is achieved in the UT.

Advisor said that the facility of Elevated Rail System is also expected to be launched in the UT by ending 2024. Besides, every household shall be provided with tap water facility by 2022 in J&K. He also deliberated on several revolutionary measures launched in the power sector.

Advisor said that successful conduct of first ever DDC polls is another achievement which shall provide people an opportunity to be part of the development initiatives in their areas at the grass root level.

Appreciating security forces for their selfless services, Advisor said that “Our security forces are alert and have been successfully foiling all attempts of miscreants and dealing up professionally to maintain peace and tranquility in the UT.”

Advisor also deliberated on progress and achievements made under PMGSY, Digital India Record, PMAY, MGNREGA, projects for up gradation of transmission lines, development of sports infrastructure, promotion of handicrafts and hand loom sectors and other areas of development.
Advisor paid rich tributes to the martyrs who laid their lives for the cause of the country.

Organized by Jammu and Kashmir Academy of Art, Culture and Languages, (JKAACL), a variety of cultural programmes was also presented by both male and female artists on the occasion.

Meanwhile, a special yoga training session was demonstrated by young yoga trainees, who received appreciation for their skilful performances.