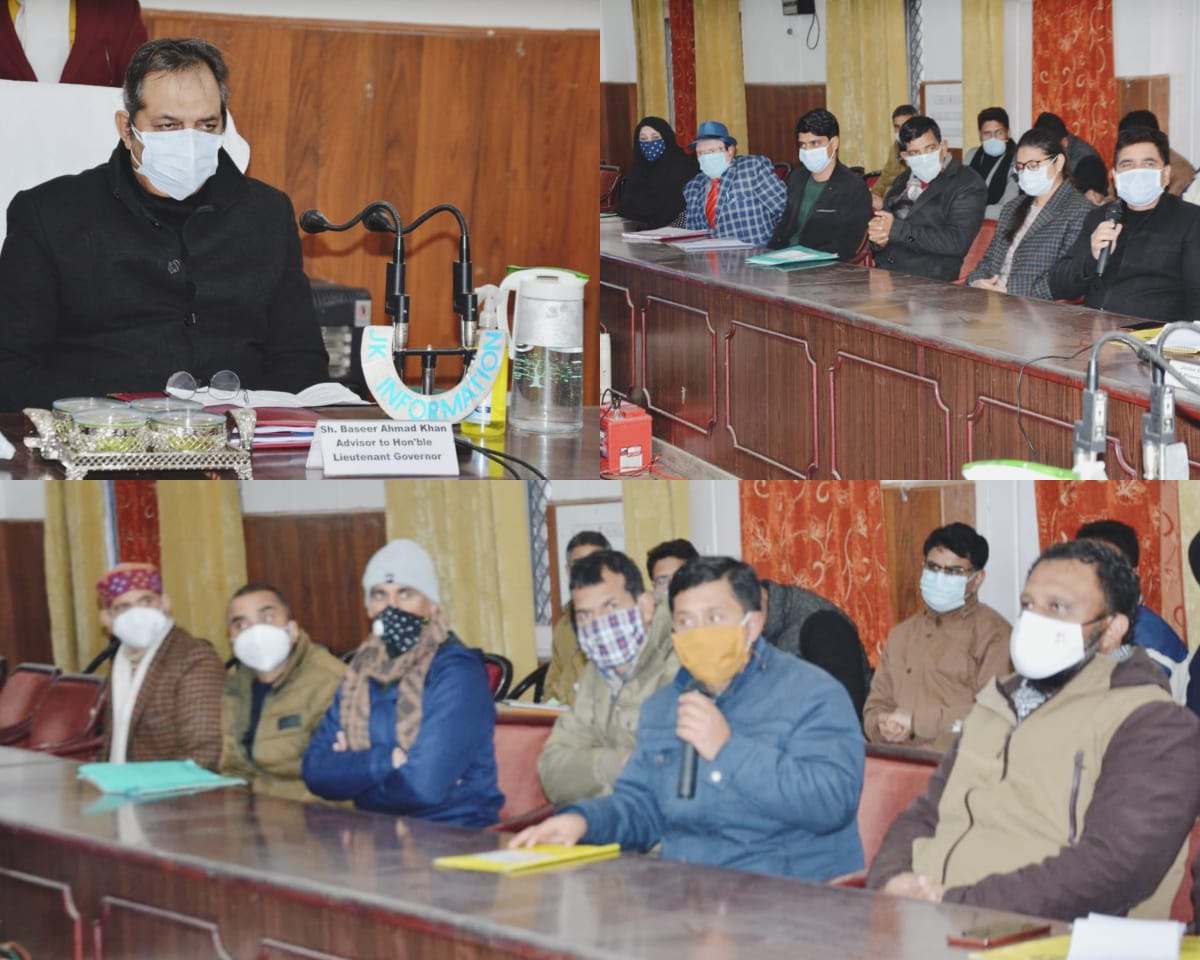 Advisor to Lieutenant Governor, Baseer Ahmad Khan, today convened an officers meeting at Bhaderwah to review development works being executed in Doda district besides listening to issues and concerns of delegations and individuals who called on him during the visit to the area.

Advisor e- inaugurated 1853 PMAY houses besides dedicating 9 community benefit works, executed by Rural Development Department, to the public.
Advisor assessed the status of various schemes and mega projects being implemented in the district by various departments besides taking stock of achievements in various sectors by the district administration.

Regarding MGNREGA, 14th FC and PMAY- G, Advisor was apprised that in the district against the set target of 39 lakh PDs for the district more than 31 lakh PDs have already been generated. Besides, construction of houses under PMAY is going on war footing and about Rs 52 crore funds have already been sanctioned to the panchayats under 14th FC for various works.

Advisor asked the concerned officers to ensure timely payment of wages under MGNREGA in coordination with Sarpanchs besides asking District Development Commissioner, Dr Sagar D Doifode, to take fortnight reviews of this ambitious scheme. He also asked the DDC to resolve the land disputes, if any, hampering the construction of newly sanctioned Panchayat Ghars.

Advisor asked the concerned to involve the PRI members in proper monitoring of all ongoing works in their respective areas so that the quality of works is not compromised.
Regarding mega ambitious projects like Goha Khaleni- Sudhmahadev road, DDC apprised the Advisor that the documentation has been completed and land has been acquired under New land acquisition laws. He also apprised that around 76 per cent physical work on GMC Doda has been completed and the offline classes have been started few days back in the make shift campus.

Advisor stressed on all the departments to expedite the progress on all languishing projects besides directing the PHE department not to leave any household uncovered under Jal Jeevan Mission.
While reviewing Power sector, Advisor directed the department to take up the matter of land requirement for construction of new receiving stations with the DDC at an earliest.

Regarding tourism sector, Advisor said that Bhaderwah has immense tourism potential which need to be exploited to the optimum and directed the Bhaderwah Development Authority and tourism department to work collectively towards achieving this goal.

Advisor, while reviewing working of Floriculture department, directed the concerned to demonstrate all the proposed activities of the department before the DDC. He asked the DDC to identify land in Doda and other areas for establishment of beautiful recreational parks.

Later, Advisor met scores of delegations and individuals and listened to their grievances and demands with assurance for early redressal of the same.