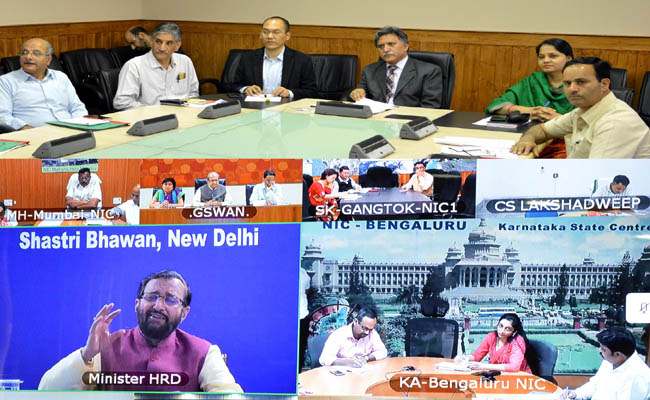 Advisor to Governor, Khurshid Ahmed Ganai today briefed the Union Minister for Human Resource Development Prakash Javadekar about the activities planned by the State to commemorate 150th birth anniversary of the Mahatma Gandhi.

He revealed the information to Prakash Javadekar in a national level meeting held through a video-conference to review the activities to be carried out to commemorate the birth anniversary of Mahatma Gandhi.

The meeting was attended by Education Ministers from across the Country through video conference.

The Advisor said based on various Gandhian principles, including his mantra of non-violence and commitment to truth, the State Government has lined up various activities in its educational institutions, especially at school and college level.

Giving detail about the school level activities, the Advisor said besides organizing various activities including drawing and debating competitions, a “play competition” across all the schools of the State would also be held. The school adjudicated with exemplary performance would be nominated to participate in the national level competition, he said.

The Advisor said the State has 97 colleges and the administration in all these institutions have been instructed to kick-start their activities related to Gandhian principles from September 24 onwards.

He assured a special programme would be organized on October 2nd to highlight the Mahatma Gandhi’s life, his thoughts, ideas, ideals, and his writings.

Earlier, Union Minister gave a detailed account to activities that the Centre has planned to carry out to commemorate the Mahatma Gandhi’s birth anniversary.  He informed Centre has provided Rs 5000-Rs 20,000 to every school for the library. He said from 1st standard to 5th standard the books will make students understand Gandhian values, while from 6th standard to 12th standard the books will explain how Gandhi is relevant even in present times. The libraries should also have books highlighting the relevance of cleanliness and project importance of peace, said Javadekar.

Besides, various competitions including drawing and debating would be held in all the schools of the country, in addition to the special type of quiz programmes which usually students are more interested in.

The Union Minister said a PadhYatra and cycle yatra will also be organized. During these yatras, awareness would be generated regarding government programmes on drug abuse and Gandhi’s teachings.