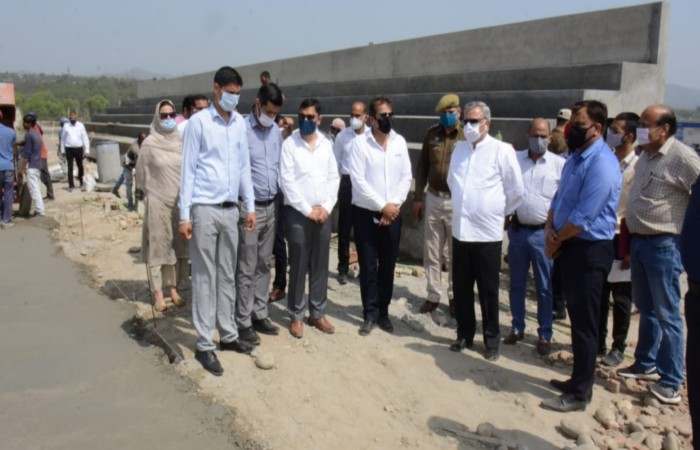 The Advisor was accompanied by Principal Secretary Youth Services & Sports Department, Alok Kumar; Secretary J&K Sports Council, Nuzhat Gul and other officers of the department during the visit.

While inspecting the ongoing works on swimming pool, the Advisor stressed upon the officers to develop it as per international standards. “Let us make it the best swimming pool in entire North India as per standards of Olympics”, he maintained.

The Advisor said that there is a need for constant synergy between the J&K Sports Council and the Department of Youth Services & Sports for enhancing participation in sports among the youth here.

Advisor Khan directed Secretary J&K Sports Council to create a database of talented sportspersons in the UT so that best talent can be nurtured. “With database of sporting talents, the government would be able to pick the best people to hone vast sports potential of the region”, he said.
Advisor also inspected under construction synthetic football turf where he was informed that it would be ready by the month of May this year.

He also inspected sites to be developed into parking zones and accommodation for visiting athletes.

Advisor Farooq Khan was also briefed about the works on eight lane athletics track for events like Javelin throw, Shot Put etc. The Advisor called the venue ‘centre of attraction’ of the Khel Gaon and called for developing it as a state-of-the-art specimen.

Advisor further suggested that additional facilities be incorporated into the Khel Gaon project for further facilitation of spectators and sportspersons. He also asked them to incorporate Velodrome in the Khel Gaonproject.

Later, Advisor met with National and International medalists from various sports, Rehbar-e-Khel teachers, coaches and Physical Education Teachers and sought their feedback and ideas for generating awareness and developing talent in various sports.
He assured them that the government, would stay in touch with sportspersons and explore ways to optimize resources and utilise available sporting talent.

It is pertinent to mention that once completed, Khel Gaon would be able to host number of sporting events like Basket Ball, Volleyball, Kabaddi, Swimming, among others.#