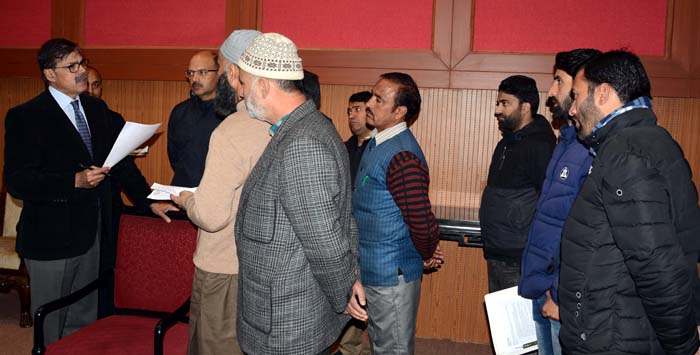 As part of Governor Administration’s public outreach programme, Advisor to Governor, Vijay Kumar today held a Public Grievance Redressal Camp where he met several public delegations and individuals who apprised him about their issues and demands for early resolution.

During the public hearing programme, 38 depitations and over 50 individuals apprised the Advisor of their grievances and sought his intervention in ensuring redressal of the same in a time-bound manner.

A delegation of Rafiabad Civil Society Baramulla made some public importance demands including up-gradation of Playground in the area, posting of Horticulture Development Officer at tehsil office, posting of specialist doctors and construction of residential quarters for the doctors and other staff.

A group of Rehbre-e-Khel aspirants from district Baramulla requested the Advisor for considering them for filling the vacant posts in the district.

Residents of Ward No -65 Jammu from Barnai area projected their demand of up-gradation of lane & drain in their area so as to give relief to the people from water logging problem.

A delegation of retired personnel of Central Armed Forces sought benefits as being provided to the ex-servicemen of defence forces.

A public delegation of Dooru in Anantnag demanded development of government hospitals both old & new, infrastructure for newly established fire station and others.

Meanwhile, a public delegation from tehsil Thathri in Doda district requested the Advisor for his intervention in construction of an important road under PMGSY and putting check on illegal mining operation going in the area.

A group of Research Scholars and Students of Jammu University and RET teachers also met the Advisor and made their representation with a request to consider their demands.

A delegation of employees of Law department requested the Advisor for conducting DPC’s for promotion and other service related issues.

A delegation of NHM Employees urged for considering regularization of their services. Another delegation of J&K Graduate Promotee Agriculture Officers Association demanded conducting of DPC’s to get their due promotions.

A delegation of Lab Assistants working in Government Medical College Jammu requested the Advisor for his intervention in directing the concerned officers for clearing their cases of due promotion.

A delegation of veteran Athletics Forum met the Advisor with a request to release funds for carrying out sports activities for the veterans.

Various other public delegation, Employees Associations and individuals in large number met the Advisor and put forth their demands including financial assistance, medical assistance, SRO-43 cases, service related issues, regularization of their services and others.

Advisor Kumar assured the people that all of their genuine demands will be looked into.