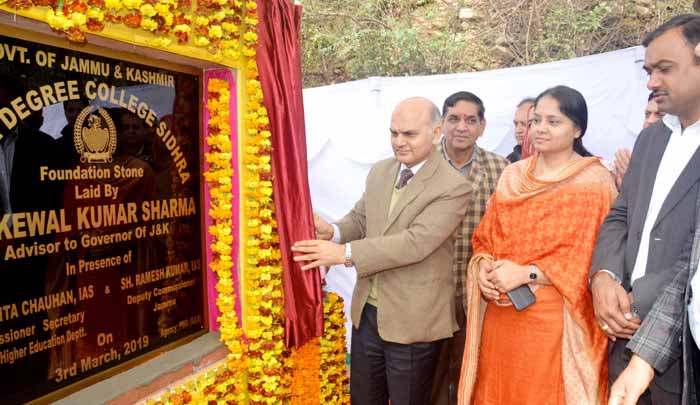 Speaking on the occasion, the Advisor said that several new initiatives are being introduced in the educational set up by virtue of which government has undertaken a programme of augmenting the infra which also includes constructing new colleges. He said that by virtue of the endeavor the people would be provided quality educational facilities within their catchment areas so that they do not have to travel distances for getting quality education.

Advisor said that a long-pending demand of the people of the area has been met today and Governor’s administration is committed to improve higher education scenario in the state. The Advisor further maintained that thrust is being laid to augment the already existing educational infrastructure by way of constructing new ones and upgrading the existing ones.

The Advisor stressed on cultivating strong and quality education mechanism and termed it necessary for building a strong nation. He said that education is one of the most important factors for empowering people besides creating a sense of equality among different sections of the society.

The Advisor said that the college which will be constructed and completed by 2021 and would provide the necessary educational facilities to the students of the area and would decongest the existing colleges of the district. He said the colleges are being sanctioned in rural and far flung areas for increasing the gross enrollment ratio especially of females.

The Advisor said that catchment areas of Sidhra and adjoining areas like Bajalta, Surinsar etc. would be benefited by this initiative and they would not have to travel longer distances for getting the requisite educational facilities. He directed the R&B for early initiation of work on the Degree College so that the project is completed within shortest possible time.

Pertinently 44 kanals of land have been allotted for the college and the work has been started by the executing agency R&B.