After Friday’s clash, what next for PDP- BJP Govt. (Commentry) 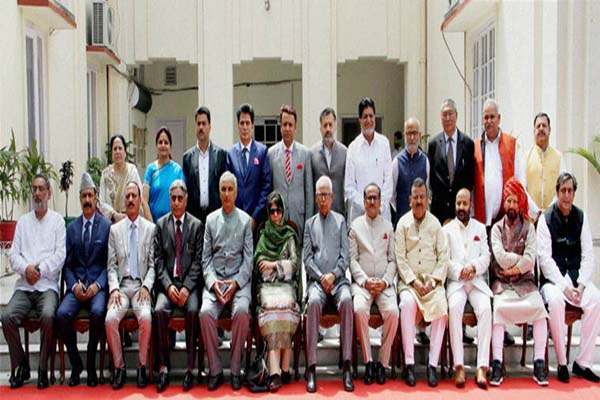 The way the cabinet meeting ended on Friday , showing the fragility of  the PDP-BJP coalition government in Jammu and Kashmir doesn’t augur well for the  state . It is yet another step down  and the responsibility  lies with the failure of the leadership  of both the ruling parties .

Chief Minister Mehbooba Mufti is a leader from the masses but when it comes to governance  she has  a many fault lines .  That was obvious the way she conducted herself at the meeting while dealing with  BJP’s stiff opposition to her proposal  to review the Kashmir Police Service ( cadre) to enable them to occupy higher positions without being subjugated to the induction into the Indian Police Service ( IPS).  She  left the meeting in anger  with few political fulminations  for her alliance partners.

She paid  her alliance  partner ministers’ advocacy for file via Delhi  by asking them ,”  let Delhi decide everything,” and warned them that she was not a “ puppet Chief Minister.”   The walk out  is a tool used when someone is not being listened to  or his or her arguments are being shunned with contempt .  But the leaders  don’t do it.

It was imprudent on the part of BJP ministers to have suggested that Delhi should be taken on board for such a review . They had forgotten that the state has a precedent  in regard to the   Kashmir Administrative Service officers. The venues for the KAS officers are  far large than those available to KPS officers.

This is clear that there  is  an absolute lack of communication between the two alliance partners  ruling the critical state of Jammu and Kashmir. So many divisions rive the state , where at least the government-running parties should be on one page. Cabinet is  not the forum  to debate these issues between the ruling parties . It is here that  the dialogue becomes important before entering  into the decision-making process. The matters are not going to be smoothened in the future as the two sides have taken their respective positions, suiting their political constituencies .

In short, this cabinet meeting  has  brought out the fact that  Jammu and Kashmir is in the  hands of  unimaginative leadership both in the government and the opposition . Bad days are ahead for the  state, because the opposition too is behaving in an immature manner.

Friday’s clashes were beginning of the sad days for the coalition .